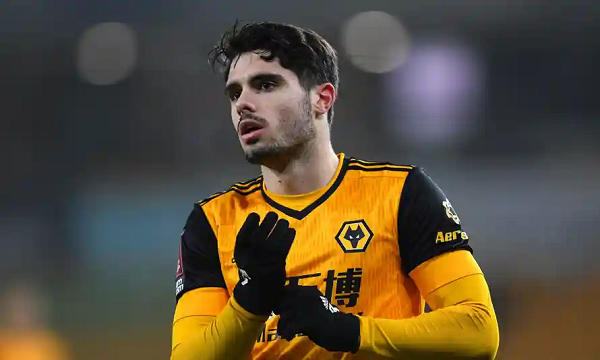 Pedro Neto in action for Wolves this month. He joined the club from Lazio in 2019. Photograph: Anna Gowthorpe/BPI/Rex/Shutterstock
30.5k Shares

Lazio have said their financial department mistakenly listed two payments worth €11m for Pedro Neto to Sporting Lisbon rather than Sporting Braga because they were “deceived by the similar names of the clubs”.

According to the Italian club’s accounts, publicly available online, two payments in relation to the Portugal forward were paid to “Sporting Lisbona” in July 2018 and March 2019 – despite the fact that he has never played for the Portuguese club.

Lazio’s and Braga’s accounts also apparently disagree over the amount of money involved in the deal for Neto. Lazio list total payments of €11m, Braga receipts of €9.5m. When Lazio took the player on a two-year loan in 2017 with an obligation to buy, Braga said they said they would receive a guaranteed €12m, rising to a possible €17m with add-ons.

Lazio sold Neto to Wolves in July 2019 for a reported £18m, almost exactly a month after they had made the winger’s loan from Braga permanent.

Neto received all his football education at Braga, aside from a loan at local side Palmeiras, and made his senior debut for them in May 2017. Three months later, he and his teammate Bruno Jordão joined Lazio on a two-season loan.

Braga released a statement, saying the player’s federative and professional rights had been temporarily transferred to Lazio. They also said the Italian club would permanently purchase these rights at the end of the 2018-19 season providing they stayed in Italy’s top division. A figure of €7.5m was quoted for the initial loan, in addition to €5m in performance-related fees and a further €4.5m to be paid in 2019 when the transfer was made permanent.

When Lazio finished eighth in Serie A in the 2018-19 season they were contractually obligated to purchase Neto’s rights. Braga’s accounts record that the previously agreed €4.5m was paid to them for all of Neto’s economic rights, in addition to a €5m loan fee.

Lazio’s accounts, however, tell a different story. On 1 July 2018 – one year into Neto’s loan spell – the Italian club recorded paying “Sporting Lisbona” €8.5m for the rights to Pedro Neto. Then, on 17 March 2019, a further €2.5m payment is listed as having been paid to “Sporting Lisbona” in relation to Neto.

Between 2018 and 2020 none of Lazio’s accounts shows any payment to Braga for the economic rights of Neto, but the payments to Sporting Lisbona are listed. About 10 entries up in the same accounts, another player – the Brazilian defender Wallace – is correctly listed as having arrived from Braga.

Lazio’s general secretary, Armando Calveri, told the Guardian via email: “I would like to clarify that Lazio bought both the players (Pedro Neto & Bruno Jordao) from Sporting Club Braga and not from Sporting Club de Portugal [Sporting Lisbon].

“Unfortunately, it was a mistake made by our financial department that was deceived by the similar names of the clubs. As you well know, SC de Portugal never registered the players. We will adjust our balances by specifying the notes related to the two cases.”

Asked why there was a discrepancy between the figures listed by Braga’s and Lazio’s accounts, he added: “As you can understand, all the financial information related to the player’s transfer are confidential and it makes things more mysterious. But in this case the imagination exceed[s] reality. Your ‘investigation’ is misled by the different fiscal approach adopted by the two clubs, probably. All the amounts related to the transfer are declared into Fifa TMS [transfer matching system] that protects transparency in the financial transactions between clubs.”

Sporting Lisbon’s accounts make no mention of Neto, nor of any payment received from Lazio in relation to the player’s economic rights. A Sporting Lisbon spokesman said the club had never had any economic interest in either player and added that the discrepancy was “obviously a mistake by Lazio. [The] Sporting Clube de Portugal legal team has already made contacts with Lazio so they can amend this mistake.”

Neto was represented by Jorge Mendes’s agency Gestifute in his move to Lazio, although his move to Wolves was negotiated by an agency owned by the long-time Mendes associate Valdir Cardoso. Gestifute declined to comment but it is understood it has also put the discrepancy down to a clerical error.

Braga also said the mention of Sporting Lisbona was “maybe a mistake made by Lazio” and that they had received a total of €17m for Neto and €8.5m for Jordão, as declared in a statement to the stock exchange in 2017.

Gestifute is listed as the Portuguese-registered agent on the loan deals sending Neto and Jordão to Lazio. Braga’s 2018-19 annual report indicates that a combined total of over €2m was paid in intermediary fees for the transfer of Neto and Jordao.

Mendes has enjoyed a close relationship with Braga over the years, in part thanks to his ties to current club president, António Salvador. The two businessmen are co-owners of the Brazilian company, Vespasiano – Investimentos Imobiliarios LTDA. The company ownership structure also includes Salvador’s long-time lawyer, Vespasiano Macedo, as well as his son and current Portuguese registered intermediary, Bruno Macedo.