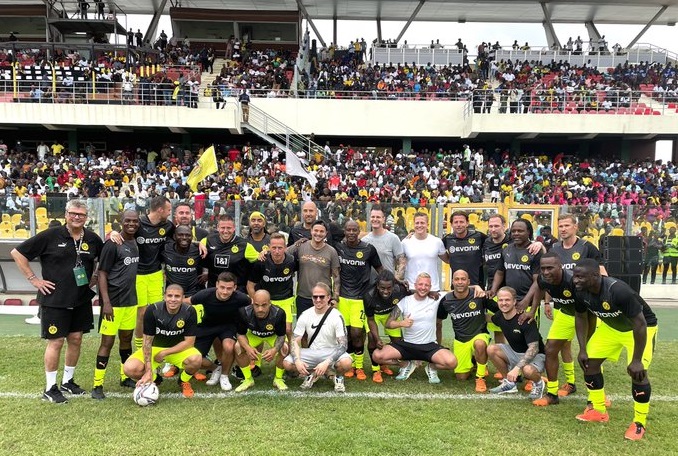 Former Ghana international Prince Tagoe came off the bench to score an injury-time equaliser for the African Giants in an entertaining 2-2 draw against the Borussia Dortmund Legends on Saturday at the Accra Sports Stadium.

The match which was the highlight of a five-day tour of the country by ex-players of the German Bundesliga giants saw Tagoe, 35, live up to his Prince of Goals moniker to level the tie for the African Giants, a team comprised of ex-Ghana internationals and former Togolese captain Emmanuel Adebayor.

Before that, Augustine Arhinful had given the African Giants an early lead which was cancelled out by Mohamed Zidan from the penalty spot in the first half before winger Kevin Großkreutz gave the Dortmund legends a short-lived 2-1 lead in the second half.

However, It was the African Giants who broke the deadlock in the 16th-minute. Former Black Stars captain Stephen Appiah received a pass from Derek Boateng in the final-third and played-in Augustine Arhinful who escaped his marker before expertly slotting home the ball past the onrushing Roman Weidenfeller who was in goal for the Germans.

Appiah and his former teammate Laryea Kingston then started pulling off their tricks against the much more workmanlike Dortmund side who drew level from the penalty spot in the 21st minute when Grossgreutz was felled by Isaac Vorsah.

The resulting penalty kick was smashed through the grasp of goalie Sammy Adjei by Zidan.

The Germans went close to scoring again before the break but were foiled by Adjei or by errant shooting from the likes of Odonkor.

The flow of the game was disrupted by a raft of changes by both sides in the second period but it was Dortmund who went ahead again when Großkreutz cut in onto his right foot from the left-flank and curled-in a shot past an unsighted Adjei in the 58th minute.

The African Giants coached by three-time African Footballer of the Year, Abedi "Pele" Ayew then went on the hunt for the equaliser with Kwame Ayew, Tagoe and Godwin Attram coming off the bench in the hunt for a goal.

Tagoe drew the teams level from a free-flowing passing move which saw Akaminko switch a pass from deep to Kwadwo Asamoah on the left flank, the former Juventus man then lobbed in a ball to Kwame Ayew who flicked-on a pass to the former TSG Hoffenheim man who scored from around the penalty spot.