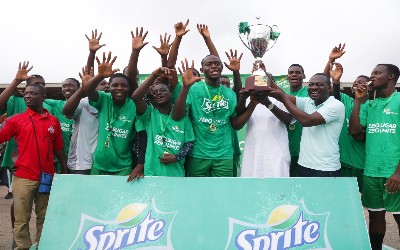 Kumasi Girls' Senior High (KUGISS) and Mfantsipim School last Saturday outclassed their opponents to win the respective Girls' and Boys' trophies of the 2019 Sprite Ball Championship held at the El-Wak Stadium in Accra.

In the girls' final, Kumasi Girls' led by centre Abigail Gyamfi retained the trophy they won in 2018 by coasting to a 22-14 win over Mfantsiman Girls' Senior High School (SHS).

KUGISS raced into and 11-0 lead in the first quarter after a sluggish start by Mfantsiman who fought back to reduce the deficit to 11-6 at the end of the first half.

However, KUGISS who do not have a standard basketball court at their school re-imposed their dominance after recess to annex the trophy.

Mfantsipim trailed for the first two quarters of the clash but opened up an 18-13 lead after small forward Samuel Owusu took charge of the game with his unstoppable dribbles and drives to the rim.

In the third quarter, as WASS struggled to cope with the pace of Mfantsipim and resorted to fouling, Owusu cheekily urged them to continue fouling as they granted his team comfortable free-throws.

Owusu who was named the Most Valuable Player of the Boys' Competition in an interview said that his team were delighted to have won their fifth title after losing out in the final to Osu Presbyterian Senior High School (Osu Presec) in 2018.

The winners of the 2019 Sprite Ball Championship are already looking forward to defending the titles they won last Saturday at the El-Wak Stadium in Accra.

Despite the fact that the teams will be without many of their first team members for the 2020 Championships reserved for Senior High Schools (SHS), both teams are confident of retaining their titles on account of what their coaches say is a rich basketball tradition in their schools.

According to Zibo Brown, the coach of KUGISS who defeated  Mfantsiman Girls' Senior High School (SHS) 22-14 to claim the girls' trophy, his players who are not yet in their final year are of the same quality of his Championship-winning teams.

"What I can say is that, since I have been the coach at the school, I always see the commitment and dedication of the girls to the sport and as I predicted before this year's championship, we will defend this trophy in 2020, that is our goal".

The Coach of Mfantsiman School, Isaac Kwabena Owusu Mensah was similarly bullish in his pronouncements, disclosing that the eight-time finalists have in place a programme to achieve results.

"We always prepare well for this competition and we always come to Accra with the intention to win and 2020 will be same," he stressed.