Kotoku Royals Football Club gained qualification to the Ghana Premier League after Sunday’s final round of Division One matches which saw the Eastern Region side drawing 0-0 with Tema Youth at the Tema Stadium.

However, officials, players and supporters of the club had to wait for the outcome of the game between Susubribi and Liberty Professionals, which also ended goalless in order to book their maiden qualification to the elite football.

Prior to kickoff yesterday, Kotoku Royals led the Division One League zone 3 league table with 62 points, followed in second position by Liberty Professionals with 61 points while Tema Youth occupied the third position with 59 points, with all three teams in poll position to qualify for the elite division.

A thrilling first half produced no goals from either side. In the second half, Tema Youth intensified their efforts but failed to find the net.

Tema Youth forward Evans Osei-Wusu struck the woodwork halfway through the second half while Kotoku Royals goalkeeper, Clinton Quaye, had to pull a double save to prevent the home side from scoring a few seconds to the 99th minute.

With the game ending goalless, Kotoku Royals had to wait till the conclusion of the match involving Susubribi and Liberty Professionals to know if they can qualify for their maiden Premier League football.

After waiting for 15 minutes, officials of Kotoku Royals and their supporters who thronged the Tema Park in over 10 busses burst out in jubilation for securing their debut promotion to the elite division.

When the match ended the Tema stadium was thrown into a festive mood by hundreds of Kotoku Royals supporters who were bussed to the stadium to witness a piece of the Eastern regional football history.

The coach of Kotoku Royals, Fritz Schmidt, expressed his delight with the performance of his team in Division One, and indicated that his side would aim to improve in readiness for topflight football in Ghana. 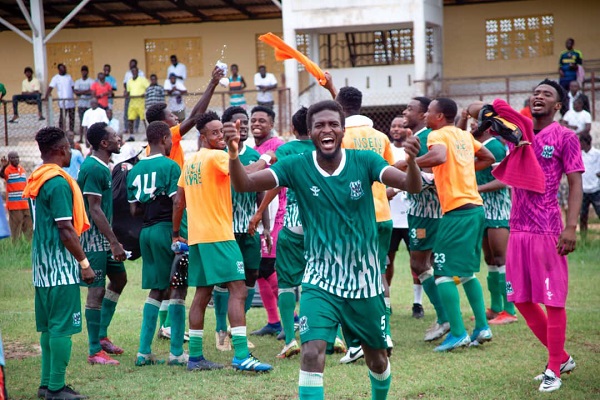 Meanwhile, Samartex 1996 FC were crowned champions of Zone Two of the Division One league as they sealed a historic qualification to the Ghana Premier League with a 1-0 victory over New Edubiase United at Samereboi yesterday.

The 'Timber Giants opened a 10-point gap in the league and secured qualification to the Premier League last month with four games to spare. Yesterday they ensured the season ended on a winning note as the Western Region incresed its representation in the elite division to four after Medeama SC, Karela United and Bibiani Goldstars.