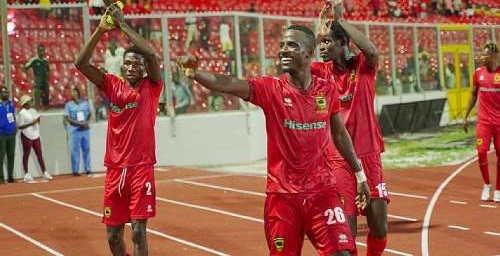 League leaders, Kumasi Asante Kotoko, scored in each half against struggling Eleven Wonders last Saturday to maintain a 100 per cent record after four matches in the ongoing Ghana Premier League.

Playing before expectant home fans at the Baba Yara Stadium in Kumasi, and galvanised by continuous drumming and dancing by students from the KNUST, Samuel Boateng chanced on a long pass and delivered a carpet shot which caught goalkeeper Abdulai Ibrahim ball-watching in the 28th minute. Isaac Oppong, aka Sunyani Neymar, also produced an individual brilliance to put the icing on the cake for Kotoko in the 76th minute.

Boateng’s opener in the 28th minute should have opened the door for Kotoko to score at least two more goals before the break, but Oppong and Fabio Gama, who were presented with those glorious opportunities, messed up.

In spite of Kotoko’s victory over lowly-placed Wonders who have just two points, there was little to choose between the two sides as the visitors put up a splendid performance to battle the homesters throughout the match.

Abalora’s saves
Before Kotoko broke the deadlock, Wonders’ Isaac Kwain sparkled the stadium with a powerful free kick in the second minute but a brilliant display by Kotoko’s goalkeeper, Razak Abalora, saved his side from conceding an early goal.

Kotoko started picking up the pieces and surged forward as Wonders maintained their dominance in midfield but struggled to penetrate their opponents’ defence.

Minutes later, Kotoko earned a free kick in the area of Wonders but Richmond Lamptey shot wide to the displeasure of the Kotoko fans.
Wonders came close to scoring again in the eighth minute but Abalora was on hand to deny Ashittey Ollenu Haderu with a masterful save to his close range shot.

Abalora pulled off another dramatic save in the 72nd from substitute George Osei Amponsah as Wonders pushed for the equaliser.