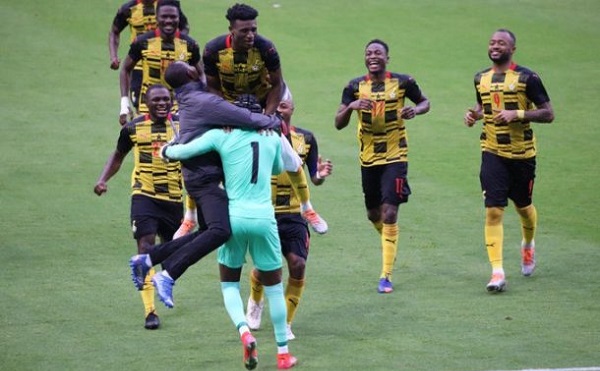 Abdul Manaf Nurudeen was the hero of the Black Stars after saving two penalties as nine-man Ghana defeated Chile to finish third at the Kirin Cup tournament in Japan.

After a pulsating 90 minutes of action, the game had to be settled from the spot, with Jordan Ayew, Mohammed Kudus and Fatawu Issahaku all converting for the Black Stars.

The Black Stars started the game the better of the two sides, with Ghana dominating possession but failed to create clear cut chances.

Fatawu Issahaku twice fired from afar but his efforts were woeful as both strikes went behind for goal kicks.

The Black Stars kept flooding the Chile half but the South Americans were resolute in defence.

After the break the Black Stars came close through forward Benjamin Tetteh, whose effort hit the cross bar.

Moments later, Andre Ayew pulled a great save from the Chile goalkeeper before Afena-Gyan also fired from 30 yards.

Ghana were reduced to ten men after Clermont Foot defender Alidu Seidu lunged on a Chile player following a miskick.

It went from bad to worse for the Black Stars as midfielder Mubarak Wakaso got sent off for a second yellow Ghana.

The Chileans took advantage of a nine-man Ghana team to dominate the final ten minutes, with Gary Medel coming close with a long range strike.

Ghana maintained their composure to force the game into penalties.