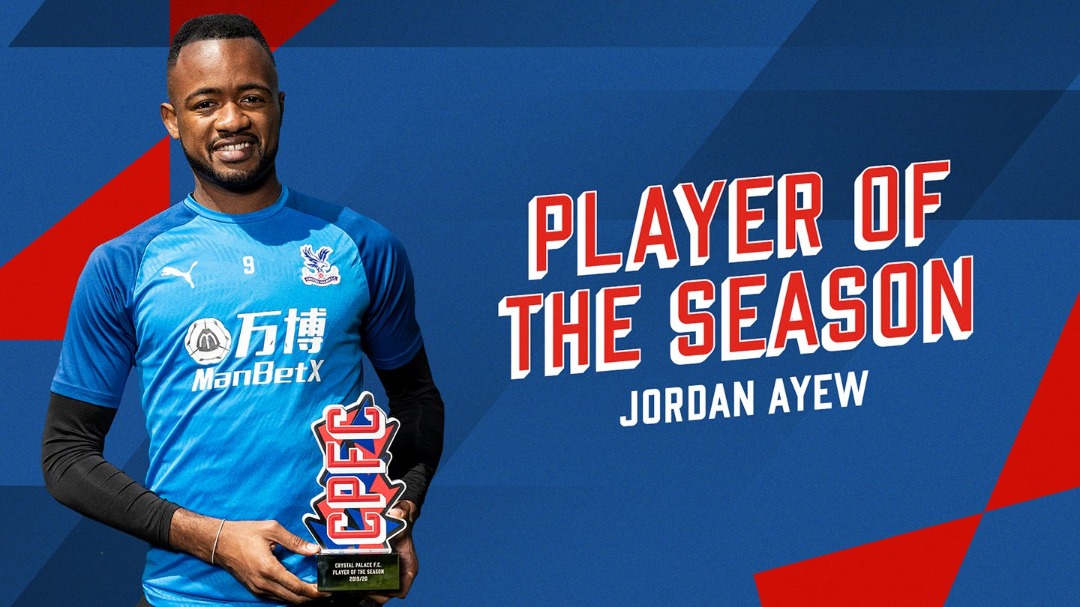 Ghanaian international, Jordan Ayew has crowned a successful season at English Premiership side, Crystal Palace by bagging a hat-trick of awards including the prestigious Player of the Season award.

Though Crystal Palace finished 14th on the English Premier League, Ayew owed his success in the awards to his improved form which saw him score nine of the 31 goals scored by his club this season and also set up a number of goals, including the assist he provided for compatriot, Jeffrey Schlupp to fetch the equaliser in the 1-1 draw against Tottenham on the final day last Sunday.

Ayew, at the team-only awards ceremony, bagged three out of the eight categories awarded.

He was rated ahead of the other players in contention as his goals earned the club 14 of the 31 points they earned as well as his consistency.

His goal, the winner against West Ham in their December 26, 2019 encounter at the Selhurst Park, was adjudged the best goal of the season.

Unlike recent years where fans attended the awards gala, COVID-19 restrictions made things a little different this season, as only players and club officials were hosted.

For the newly-crowned Player of the Year, winning three awards on the night was a similar feat chalked by the player at the end of the 2018 season while he was at Swansea.

Talking about his awards on Crystal Palace TV, Ayew got emotional as he dedicated his awards to the people who had helped him in his career, particularly, the former President of Olympique de Marseille, Pape Diouf, who sadly passed away last March, after contracting the coronavirus (COVID-19) infection.

"When I have this type of award I just think of my family and obviously of the fans. And one man that’s been so influential in my football career: that’s Pape Diouf.

“ I lost him within the period of the COVID and he passed away, I wish he was still here so I could present him this. He was so influential in my football career, he was the one who opened the doors for me to start playing football. He was more than a father so I’d like to thank him very, very much. Because if it wasn’t for him I wouldn’t be where I am today, so that’s my message I have for him.

"And my parents have been supportive, my dad and my mum, they have been there since day one, for hard times; they’ve been there for me, always been positive with me. My brothers as well have been so supportive,” he said as he tried to wipe away tears from his eyes.

The striker was also grateful to the coaching staff and his teammates as well as the fans for their support and belief which has seen him through some difficult times.

"I’m short of words because I’m a bit sad at the moment but I’d like to thank the coaching staff that have given me the opportunity to express myself this season.

“ I’d like to thank my teammates because if it wasn’t for them I wouldn’t have this award.

"I’d like to thank the fans one last time for this season and for the support they’ve given us this season, especially me. Hopefully next season will be a better one and hopefully we can finish as high as possible," he said.

Playing only his second season at Selhurst Park, Ayew put up an improved performance all season starting off with his memorable opening goal against Manchester United at Old Trafford last August at the start of the season, a match Palace would go on to win 2-1, their first ever victory at the Theatre of Dreams.

He also scored some important goals and set up others in the 31 goals his side netted in the Premier League and which helped them claim 43 points to finish 14th.

This is Ayew’s fifth season in the EPL, having arrived in July 2015 to play for Aston Villa but joined Swansea in the 2016-17 season after the former were relegated.

However, he left the Swans and joined Palace on the final day of the transfer window in 2018 on loan after the Wales-based side were also relegated.

In 2019, Ayew earned a permanent move to Selhurst Park, sealing a three-year deal.