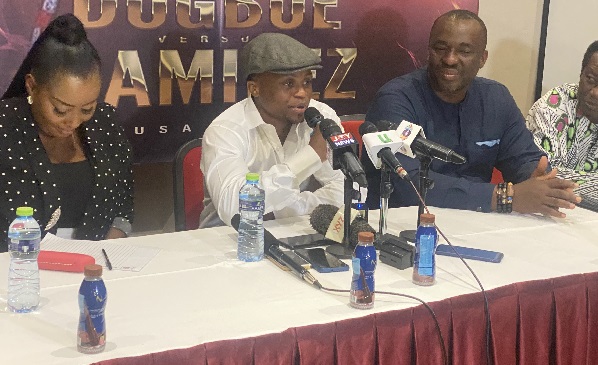 Dogboe (24-2,15 KOs) described his opponent in the upcoming WBO featherweight championship encounter as a tough customer who would be coming into the fight as a two-time Olympic gold medallist.

Ramirez, 29, won the gold medals as a flyweight at the London 2012 Olympic Games and the 2016 Olympics in Rio, Brazil.

Addressing a press conference in Accra yesterday, the 28-year-old Dogboe said he was ready to take up the challenge against Ramirez (11-1, 7 KOs) to make a statement in the 126-pound division.

“It is the perfect time for me to get this opportunity to become a two-time world champion and I can’t wait to take it.

“Ramirez is a tough customer; I have to admit to that. Looking at how far he has come, he will give everything to become a champion, but I am determined to stop him,” he said.

The President of the Ghana Boxing Authority (GBA), Abraham Kotei Neequaye, praised Dogboe’s determination to redeem his image, which had seen him win his last four bouts.

Mr Neequaye noted that the former champion remained the nation’s hope of winning another world title this year and called on Ghanaians to support him to achieve that.

“Dogboe has proved to be a force to reckon with since losing his world title in 2018 to Emanuel Navarrete.

“I believe he has what it takes to become a two-time world champion and he is the nation’s hope of winning it this year,” he said.

The Ghanaian has defeated Chris Avalos, Adam Lopez, Christopher Diaz and Joet Gonzalez on his way to redemption.

With Navarrete set to fight Liam Wilson for the WBO super featherweight championship, Dogboe and Ramirez have been scheduled to battle it out for the Mexican’s vacant featherweight title belt.

Meanwhile, Ramirez lost in a shocking split decision to Adan Gonzalez in August 2019 when he made his pro debut but has bounced back to win 11 consecutive bouts, including