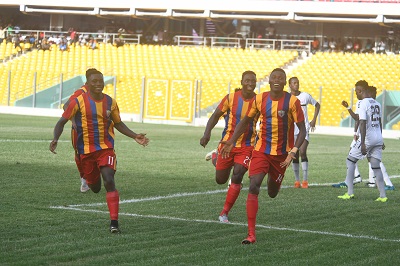 Accra Hearts of Oak took advantage of a 10-man Inter Allies side to ensure they ended the first round of the ongoing Special Cup competition on a winning note after chalking up a vital 2-0 victory against the Tema-based side at the Accra Sports Stadium yesterday.

Defender Robert Sowah Addo and striker Joseph Esso scored in the 53rd and 82nd minutes of the game respectively to return the Phobians to winning ways after they had lost 2-3 to WAFA at Sogakope last Sunday.

The Phobians utilised an indirect free-kick from an incident in the 47th minute that saw Allies' goalkeeper Saed Salifu being sent off when he handled the ball outside his penalty box. Salifu’s dismissal resulted in a five-minute hold up as the goalkeeper sat on the pitch crying while his teammates protested at the decision.

After calm was restored, Inter Allies’ substitute goalkeeper Clement Aryee pushed the free kick taken by Hearts to corner but failed to stop Hearts defender Addo from rising high to head home the corner kick for a deserved opening goal.

The Phobians doubled their lead after 82 minutes of play when Esso ran onto a through ball and rounded off goalkeeper Aryee before slotting home the winner.

The match kicked off with high intensity, with both sides struggling to make any significant impact but it was the Phobians who made their presence felt after just three minutes when forward Esso's header from a Christopher Bonney cross missed the target narrowly.

The Phobians again came close to scoring by the half-hour mark when Kwadwo Obeng Jr missed what turned out to be the best chance of the first half, having been given a through pass, but Inter Allies' goalkeeper Salifu was quick off his line to save the situation.

With just two minutes to end the first half, Hearts coach Kim Grant replaced Obeng Jnr with Kofi Kordzi in order to make his attackers sharper.

However, two minutes into the second half, tragedy struck the visiting side as Salifu was given the marching off order for an incident for which his Hearts counterpart, Richmond Ayi, was given a milder sanction despite committing a similar offence when he had earlier handled the ball outside his box only for the referee to show him a yellow card.

The sending off tilted the balance of play in favour of the hosts as they dominated the exchanges in search of their second goal and it paid off in the 82nd minute when Esso broke away with a through ball to dribble goalkeeper Aryee to score and seal victory for the Phobians.

With the match already won after Esso’s goal, the Phobians decided to keep possession of the ball in a bid to hold on to their two-goal lead.