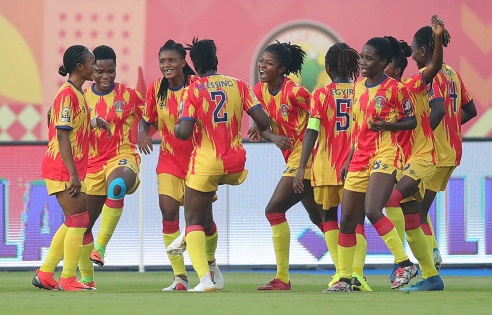 Sekondi Hasaacas Ladies have reached the final of the inaugural CAF Women Champions League after defeating ASFA Rabat of Morocco 2-1 in their semi-finals clash in Cairo.

Goals from Doris Boaduwaa, who scored her first at the tournament, and Evelyn Badu, who netted her fifth, were enough to dispatch the Moroccans who stretched the Ghana and West Africa Football Union (WAFU) Zone B champions to their limit.

On a day that the Moroccans proved unyielding, it took special moments and a gritty performance by Hasaacas Ladies to achieve the historic feat.

As was expected, the match turned out to be an uncompromising clash given that it was a knockout and was served hot with much drama, including a penalty miss and a VAR check.

In the end, goals from Doris Boaduwaa and Evelyn Badu provided the key to send the Moroccans packing after they had revived their hope with an equaliser from Najat Badri.

After a ding dong affair which lasted for close to 34 minutes,

Boaduwaa ended her frustration to break the deadlock.

But the goal lasted only for moments, as Badri equalized, taking her chance when she went unmarked to slot the ball into the near post to end the first half 1-1.

On resumption, ASFA tried to take the lead but the strong Hasaacas Ladies defence kept trouble at bay.

By the 50th minute, Hasaacas had taken charge and pushed and pressed for another goal.

It was from one of such moves that goalkeeper Khadija Er-Rmichi brought down Badu. The referee had to get help from VAR to decide on whether it was a penalty or not.

Used for the first time, VAR ruled it as a penalty but the resultant kick was wasted by Perpetual Agyekum.

Unrelenting, the Ghana Double Champions and the West Africa Football Union (WAFU) Zone B representatives in Cairo pressed on and it finally paid off with Badu's fifth goal at the tournament.

She headed home a cross from Boaduwaa to put Hasaacas Ladies 2-1 up.

ASFA Rabat tried to fight back but they were left disappointed as the game ended 2-1 after three minutes of time added on.