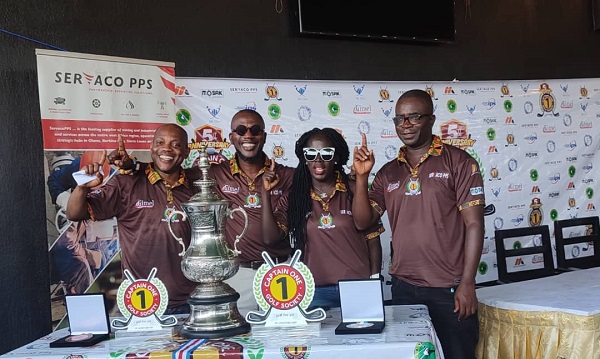 Mr Pius Ayeh(left), President and founder of the Captain One Golf Society. He is flunked by Richard Boateng, Vice-Captain, and Flora Hurtubise, Lady Captain Follow @Graphicgh

The Captain One Golf Society yesterday launched the fifth edition of its annual charity invitational championship which is targeted at establishing a scholarship fund to educate underprivileged children in the country.

Part of the proceeds of the tournament, slated for Friday, January 21, to Saturday, January 23, at the Royal Golf Club in Kumasi, will go into adopting an orphanage home which will receive regular support from the society.

Addressing the launch in Accra, the president and founder of Captain One Society, Mr Pius Ayeh Appiah, said the society would also leverage the tournament to support professional golfers to compete at the highest level.

Mr Appiah said the tournament, which was modelled after the historic English FA Cup, will provide an equal opportunity for amateur golfers to compete against professionals for honours.

He said he was looking forward to an exciting tournament because over the four previous editions, the amateurs had won it once and the professionals had won it three times with Ghana's leading golfer, Vincent Torgah, being the defending champion.

On his part, the Tournament Director, Mr Solomon Harvey, disclosed that only the juniors will participate on the opening day, with the main event featuring 100 amateur and professional golfers,  teeing-off on Saturday.

He said there would be a cut-off after the opening round, with only 60 golfers with the best scores competing for 10 prizes on Sunday, January 23.

In the event that the course becomes unplayable, the tournament will be decided by the rounds that the players have completed.