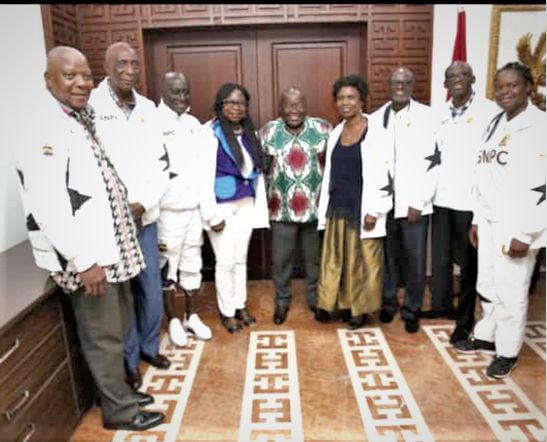 President Akufo-Addo has pledged his administration would see to the revival of athletics in the country.

While lauding the GNPC Ghana's Fastest Human team for their initiative in unearthing talents he assured of fair distribution of sports funds to uplift the least-financed sports.

The President gave the assurance this last Friday when six past athletics greats visited him at the Jubilee House in Accra.

He expressed his dissatisfaction at the level at which athletics in the country had sunk and promised to make the effort to bring it at par with football.

The six are Alice Annum, Hannah Afriyie, Mike Ahey, Oko Addy, Ohene Karikari, and Emmanuel ‘Koora’ Tuffour who opened up on some of the challenges they were currently facing many years after representing the nation in various international competitions.

Rex Brobby, a former national athlete and founder of GNPC Ghana's Fastest Human talent hunting event, explained to President Akufo-Addo about their new initiative of qualifying Ghana's relay team to Tokyo 2020 with the support of GNPC.

Under the initiative, Mr Brobby said they have outlined a number of competitions they intend to participate in March and April to make the qualification time for the world relay in Japan in May.

According to him, they have targeted competitions such as the prestigious Penn Relays, Texas Relays, Florida Relays and the Mt.

Sac Relays, all in the USA, and he was hopeful that they could get some athletes to qualify for the big competition.

He mentioned athletes such as Emmanuel Dassor, Emmanuel Yeboah, Joseph Paul Amoah, Martin Owusu Antwi, Sean Safo-Antwi and other local sprinters as the runners they intend to support for qualification.