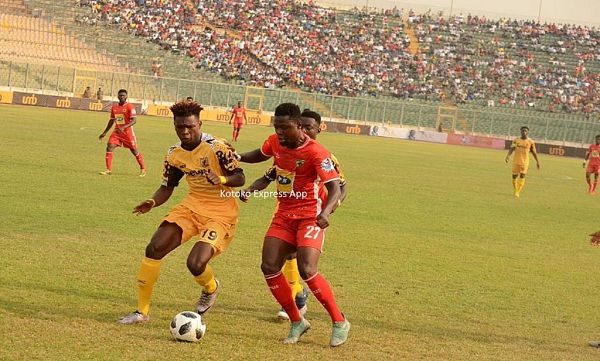 Kotoko will be looking forward to building upon their heavy 3-0 win over Techiman Eleven Wonders last Sunday by producing another masterclass against Ashantigold in a tough game which will put the bragging rights on the line.

The Porcupine Warriors have so far won twice out of their three outings and will work tirelessly to avoid losing to their noisy neighbours who forced a second straight goalless draw on the road against Aduana Stars at Dormaa-Ahenkro last Sunday.

Coach Charles Kwablan Akonnor of Kotoko is expecting a full house against the Miners despite reports linking several big names such as skipper Amos Frimpong, Songne Yacouba and Emmanuel Gyamfi away from the club.

Ashantigold, on the other hand, are bent on returning to winning ways, having won once over Eleven Wonders (2-0) and drawn twice against Bechem United and Aduana Stars, making the clash a very cagey one.

Aduana Stars will visit the Golden City Park to play Berekum Chelsea and Medeama play host to Bechem United at the Tarkwa T&A Park in the other northern sector fixtures.

In the southern sector, Accra Hearts of Oak return to the Accra Sports Stadium today to lock horns with Ebusua Dwarfs in a must-win assignment to revive the Phobians campaign after losing their last two games to Elmina Sharks and Karela United by 0-1 margins away.

Coach Kim Grant needs to get his charges back together to avoid another defeat, having registered their first win at home against Dreams FC barely a fortnight ago.

Liberty Professionals will storm the Nduom Sports Complex to face Elmina Sharks, high-flying Karela United will hope to maintain their unbeaten run with a trip to Sogakope to challenge WAFA, while inter Allies battle it out with Dreams FC at the Tema Stadium.