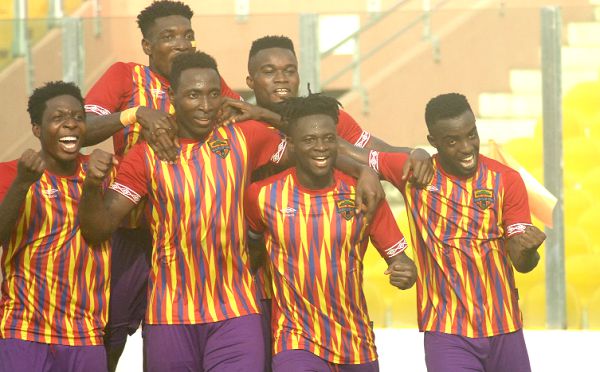 Accra Hearts of Oak registered their first win of the season when they beat visiting Mysterious Ebusua Dwarfs 2-1 at the Accra Sports Stadium on Sunday.

Two set pieces by attackers Joseph Esso and Kofi Kordzi in the 29th and 56th minutes, respectively, gave the Phobia fans something to smile about and a vital three points after two successive losses.

Hearts began with much enthusiasm and launched an onslaught in their opponents’ area in search of an early goal.

That nearly paid off when an interplay involving forwards Joseph Esso, Kofi Kordzi and Obeng Kwadwo Junior nearly fetched the opener, but when striker Umar Abdul Manaf was released, his shot went wide.

The hosts continued their onslaught and finally got rewarded in the 29th minute when Kordzi was brought down at the edge of the box for Esso to take the resultant free-kick.

His low drive displaced Dwarfs’ goalkeeper Razak Issah who was motionless as he watched the ball enter the bottom corner of his net.

Hearts almost increased the tally five minutes later when Kwadwo Obeng Junior dummied his marker in the box. While his shot beat the goalkeeper, it hit the post to the huge disappointment of the Rainbow fans.

The visitors woke up from their slumber and responded with the introduction of substitute Isaac Donkor to bolster their attack in the 37th minute, but skipper Dennis Nkrumah-Korsah and attacker Moro Sumaila’s exchanges in the area failed to beat Hearts goalkeeper Richard Attah who saved their final shot.

Back from recess Heart’s Kofi Kordzi and substitute Benjamin Agyare probed in the area to increase the tally but couldn’t organise themselves properly in the area and lacked finishing.

Dwarfs grew into the game and made good use of the flanks as they wore Hearts down. In the 69th minute, substitute attacker Albert Ato Hammond was released in the Hearts area with only the goalkeeper to beat after splitting the Hearts defence open.

He side-footed a low drive past an advancing Richard Atta for a consolation.