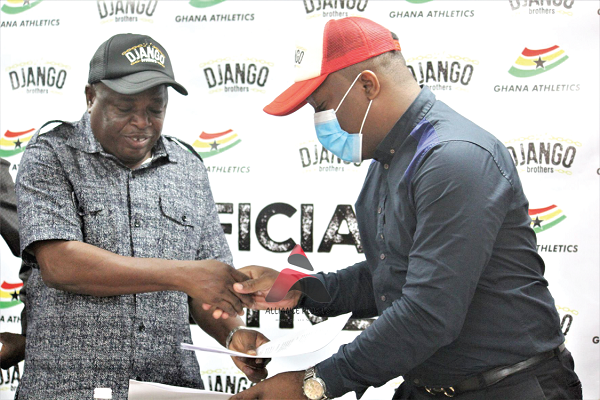 The partnership will see Django Brothers sponsor, at least, one National Athletics Championship every year, as well as support developmental and administrative activities of the GAA during the duration of the deal.

Although the details of the agreement were not disclosed at the signing ceremony yesterday, the Chief Marketing Officer of TCB, Mr Christopher Opara, said the agreement had a largely cash-based component and that his outfit would set aside at least GH¢100,000 for the organisation of a Django Brothers-themed event yearly.

Mr Opara noted that since the two organisations already share similar values, including excellence and self-belief, the agreement was a no-brainer.

"We hope that this partnership brings us a lot of good tidings, a lot of medals and, most especially, a lot of great athletes from Ghana," he said.

TCB is Ghana’s first microbrewery and is known for its flagship brand, Django Brothers, a non-alcoholic beverage, as well as still and sparkling water.

Speaking on the new partnership, the GAA President, Mr Afelibiek Ababu, said the partnership agreement was initiated by his predecessor, Prof. Francis Dodoo, stressing that it was subject to review after three years.

"Tema Craft Brewery is going to support us to organise athletics activities in the country and every year they are going to sponsor one major event, which will be termed Django Brothers National Athletics Championship,” he said.

"Aside from the yearly major championship, they will also support the Ghana Athletics Association in developmental activities, administrative activities and then activities towards the development of our athletes, especially their preparation and sponsorship for international activities," he added.

In his address, the Deputy Director (Technical) of the National Sports Authority, Mr Kwame Amponfi Jnr, assured TCB that Ghanaian athletes were worth investing in, given their exploits at the recent Olympic Games in Tokyo, Japan.

He said the government-endorsed such investments in the Ghana athletics brand and urged more corporate bodies to invest in Ghana sports.