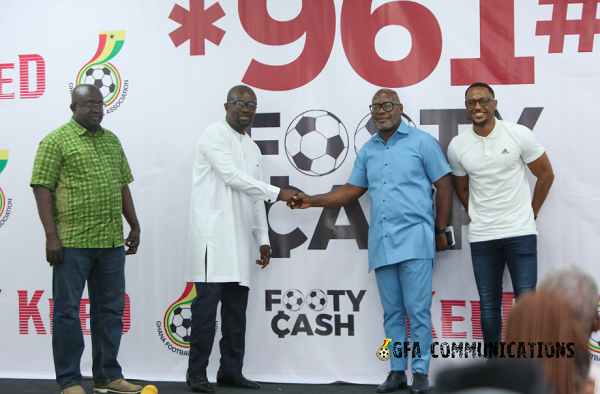 The launch of the game ties perfectly into the KGL's agenda of sports development, particularly Ghana football and also offers an opportunity for Ghanaian football fans to win instant cash.

"The game promises two main things - Simplicity and The Ease of Winning!," he said.

"We have simplified the pool bet system and placed it on a USSD code, *961# and are almost ready with a web application that delivers more simplicity with even more options for bet lovers to choose from".

"Players stand the chance of winning instant cash prizes sent directly into their Mobile Money wallets once matches are resulted and confirmed. With stakes as low as GHS winners can in excess GHS 1,000 just by predicting correctly the outcome of matches".

"Footy Cash promises to amplify the local Leagues, primarily the betPawa Premier League, the Malta Guinness Women's Premier League, and the Access Bank Division One League, all sanctioned by the Ghana Football Association".

The business Manager of Footy Cash, Mr. Frederick Abbey, explained the modalities of the game and reiterated his excitement at the launch of the product.

The President of the Ghana Football Association, Kurt Edwin Simon Okraku also hailed this exciting partnership with KEED, and remarked that "this is part of our overall strategy to bring back the Love for Ghana Football. Our singular agenda for creating wealth not only for the game, but you, our football fans, is on course. Indeed, Money in your pocket, na stadium we go go!".

He added, "Funds from this will go towards infrastructure development for the Betpawa Ghana Premier League, the Malta Guinness Women's Premier League, and the Division One League. This means better pitches, better salaries for our players, a more attractive league that Ghanaians can be proud of".

He also lauded the KGL Group, led by Executive Chairman Mr. Alex Dadey, and CEO of KEED, Mr. Christian Salamouni for believing in the partnership, Ghana Football and the Ghanaian game.