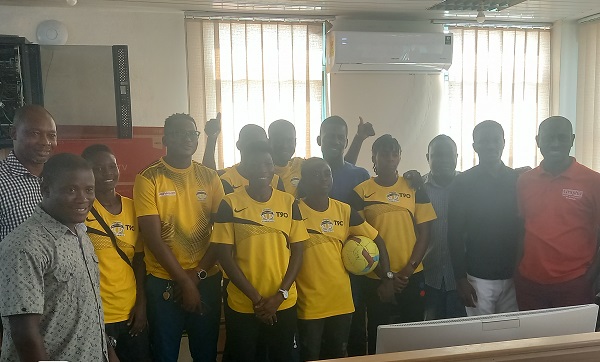 Women’s Premier League side, Dansoman Faith Ladies, have declared their intention to compete in the CAF Women’s Champions League in the near future.

The debutantes finished second behind Hasaacas Ladies in the southern zone of the just-ended Women’s Premier League, giving them the confidence to fight for a CAF Women’s Champions League ticket next season.

During a working visit to the Daily Graphic’s offices last Friday with some key players of Faith Ladies, Francis Mawutor, the communication and marketing affairs manager of the club, revelled in the modest achievement of his outfit so far and revealed their motivation to compete at the continental level.

"With the talents we have and the extraordinary work the young ladies have been putting in during their training day in day out, management has a strong conviction that by next year, we could feature in Africa and make our presence felt," he said.

“The players have what it takes to make a significant impact if we get there and all that we are looking forward to now is the needed support,” he stressed.

He intimated that the club was no exception to the financial challenges being faced by female clubs in the country and as a result, access to funds to lubricate the wheels of the team was sometimes lacking.

"The team have a lot of plans and the actualisation of these activities calls for resources, which are not enough. This sometimes puts a clip on our wings whenever we try to stretch beyond the limit.

“That notwithstanding, I must express our utmost gratitude to Kofshop.com for its unflinching support since the beginning of this project and in the same vein appeal to other corporate bodies to come to our aid," he appealed.