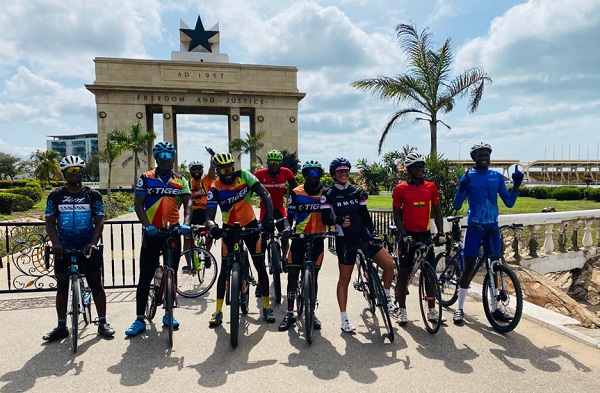 Members of the Gladiators Cycling Club

A 119-kilometre charity cycling race will be held on September 21, 2021, to mark the birthday of Ghana's first President Osagyefo Dr Kwame Nkrumah in Accra.

Organised by a private non-profit organisation, the Gladiators Cycling Club, the criterium race covers over 35 laps - an average of 3.39 kilometres per lap.

The route which has notable landmarks on what is expected to be a gruelling course around the Accra Stadium include the National Theatre, the African Union Roundabout and the Osu Cemetery.

According to the organisers, the event which starts at 7.30 am has attracted prospective participants from parts of Ghana and other bordering countries including Nigeria, Togo, and Côte d'Ivoire.

The ultimate winner of the race will take home a trophy and a cash prize of GHS6,000.

According to a statement issued by the club, proceeds from the race will be used to support the club's charitable initiatives which benefit deprived communities in Ghana and other parts of the world.

"The Club’s Ghana by Bike (GBB) and Last Mile to School (LAMISI) initiatives (among others), are geared towards the promotion of cycling for good health and the celebration of cultural diversity," the statement said.

"For instance, the club’s charitable donations of bicycles to children in deprived areas of the country enable ‘less advantaged children' access the benefits of free education by cycling to cover the unbearably long walking distances from their homes to their schools, for which reason many are unable to attend".