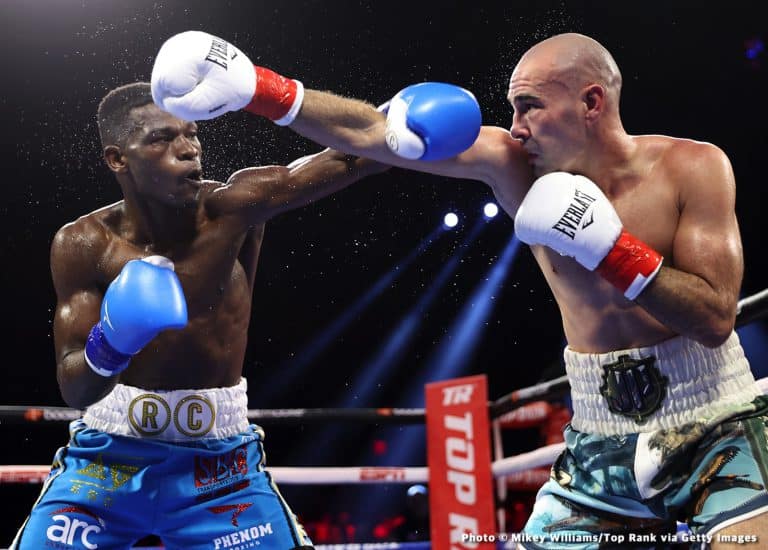 It was the main event of the Top Ranked promoted bout which saw the Ghanaian fighting at the super-lightweight division for the first time since a disastrous loss to the Ukrainian, Vasyl Lomachenko, in the United States in December last year.

In the first round Commey dominated for the most part in the first two minutes with an effective jab, pressing forward against Pedraza who finished better in the last minute of the round. In the second round Commey came out firing, hurting Pedraza a minute into the round with rights on the chin. Pedraza resorted to southpaw in a bid to slow down the offensive attack of Commey.

In the third round Pedraza came off the ropes, getting the better of the two. Seconds later it was Commey landing a right on the chin which got Pedraza’s attention. In the final minute Commey drew blood from the nose of Pedraza and caused a swelling under his left eye. In the fourth round Commey continued dominating the fight, having Pedraza on the defence and still fighting in a southpaw mode.

In the fifth round Commey continued by landing shots on Pedraza’s body which made him back off, with little offence in return.
With both fighters coming off losses it seems Commey was determined to win the fight. In the sixth round a clash of heads caused a cut on the left eye of Commey though the commission at ringside claimed he was cut before the clash of heads after viewing the round. That seemed to spur Pedraza on as Commey kept wiping the blood in order to prevent it from entering his eye.

In the seventh round, Pedraza was having his best round with rights to the body of Commey who still seemed tentative due to the cut. In the eighth round Pedraza continued going to the body, backing up Commey.

In the ninth round halfway point Pedraza hurt Commey with a flurry of punches, especially left uppercuts to the body of Commey. By the end of the round Commey seemed exhausted. In the tenth and final round Pedraza continued landing blows on the body of Commey until the final thirty seconds when Commey landed rights to the chin of Pedraza. The referee was Gerald Ritter.