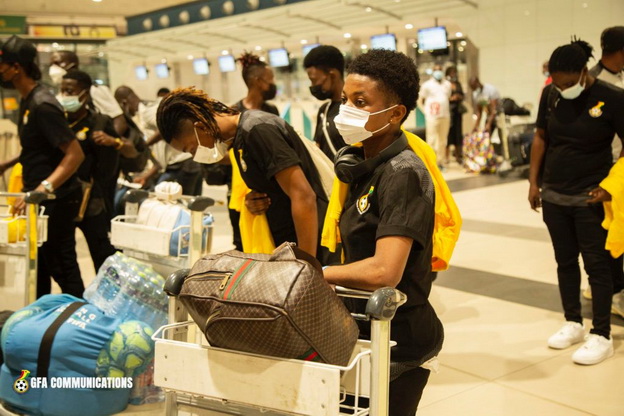 Ghana’s senior female national team, the Black Queens are in Lagos, Nigeria to participate in the inaugural edition of the Aisha Buhari Invitational Tournament, an international tournament being organized by the Nigeria Football Federation (NFF).

The Queens, who departed Accra early Monday morning, are part of the six nation competition to honour the First Lady of Nigeria as well as provide more playing time for the players of the invited teams.

Other participating teams apart from the hosts, Nigeria, who have also reported for the competition are South Africa, Cameroun, Mali, and Morocco.

In a pre-departure interview, the head coach of the Queens, Mercy Tagoe Quarcoo said the tournament would be used as a preparatory exercise for the 2022 Africa Women’s Cup of Nations (AWCON) qualifier against Nigeria later this year.

“I think every participating team considers this tournament as a very important one. If you look at the invited teams, it is a mini African tournament and we consider it as such.
“For us, our main objective is to use it as a preparatory grounds for the 2022 AWCON qualifiers later in October and incidentally, against Nigeria,” Coach Tagoe-Quarcoo said.

Tournament
The tournament kicks off Wednesday, September 15, at the Mobolaji Johnson Arena, Onikan, in Lagos.

It has received approval from the continental governing body, the Confederation of African Football (CAF) as well as the world governing body, FIFA, which has indicated that the tournament would be considered as a ranking event for the participating teams.

“In accordance with the article 7 of the regulations, FIFA is happy to provide official authorization for this women’s tier 1 tournament…

“We hereby remind the participating teams that the Laws of the Game must strictly be applied to these tier-1 matches.

“Finally, we would also like to draw your attention to the contents of FIFA’s circular no.1735 of 1st October 2020. The strict application of the FIFA’s Return to Football – International Match Protocol (IMP), or an equivalent protocol of your confederation compliant with the said Protocol, is required,” the letter of approval to the organisers stated.

Drawn in Group B, the Queens will open the competition against South Africa’s Bayana while Cameroun draw a bye.

In Group A, Nigeria’s Super Falcons will open their campaign against Morocco