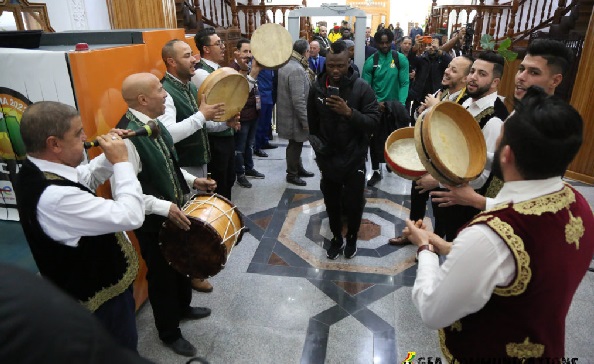 The Black Galaxies arrived in Constantine ahead of their Group C opener
30.5k Shares

The senior national home-based team, Black Galaxies, arrived in Constantine last Thursday for their group stage matches of the 2022 TotalEnergies African Nations Championship (CHAN) in Algiers with the aim of returning to Ghana with the trophy.

Coach Annor Walker’s charges are in high spirit ahead of the tournament following a successful preparation which has seen them play four friendly games without defeat.

Having made the final of the CHAN on two occasions in 2009 and 2014 but failed to win the trophy, the current Ghana squad can make history if they are able to break the jinx this time around by first getting past the group stage.

Ghana will face Madagascar in their opening Group C encounter tomorrow at the Mohamed Hamlaouj Stadium in Constantine, seeking to ride on their impressive form in their third continental campaign.

In their build-up to the tournament, the Galaxies secured victories over Al Ahly and Egypt U-20 national team in friendly encounters in Cairo, while managing a goalless stalemate with their Algerian counterparts in Algiers exactly a week ago.

However, the team’s final preparatory game against Mozambique ended abruptly after their opponents left the field in protest against a penalty awarded to Ghana which could have restored parity for them.

The team’s focus now is to qualify from Group C which is made up of Madagascar, Sudan and Morocco by opening the tournament on a good note tomorrow.

Coach Walker is pleased to have inspirational skipper, Gladson Awako, fully fit to lead his teammates against Madagascar, with the likes of striker Daniel Afriyie Barnieh,

After tomorrow’s duel, the Galaxies will face Sudan on January 19 in the second match, before clashing with title holders, Morocco, on January 23.