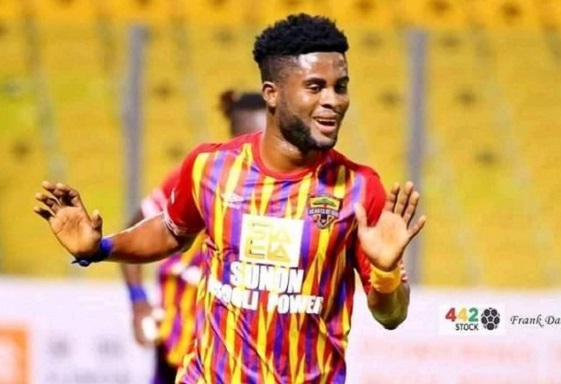 Accra Hearts of Oak striker, Daniel Afriyie Barnieh, has decided to adopt a hide-and-seek approach regarding his contract extension with the Phobians.

The young promising striker, who returned from the 2022 FIFA World Cup in Qatar last week, has declined to sign a new contract with Hearts following interest in his signature from several European clubs, including clubs in the oil-rich gulf country of Saudi Arabia.

Information available to Graphic Sports indicates that the 24-year-old player has been evasive about appending his signature to a new deal long before his contract expires.

The player is said to have just a few weeks left on his contract and a board member of Hearts, Dr Nyaho Nyaho-Tamakloe, told Graphic Sports in an interview last Friday that the player had refused to reopen negotiations for a new contract.

He said Barnieh had often used his engagement in international duties as an excuse for not negotiating a new deal and anytime he was asked to negotiate for a new contract, he would point to one national assignment or the other as the reason he could not do so.

''We have not even had the opportunity to sit down with him. Whenever you call him he'll give an excuse and because he gets invited to the national teams he'll tell you that we are going here and when we come back I'll sign,'' he explained.

Dr Nyaho Nyaho-Tamakloe emphasised that after a lengthy chat with the player last Friday, he promised to call back. He, however, said that the club would not push the player further if he decides not to sign because they had had enough of him postponing invitations to the negotiating table to talk about his plans.

''I've told my colleagues on the board that we should not allow him to dictate to us. If he is unwilling to sign we should allow him to go because it was Hearts that brought him to the limelight and if he wants to be ungrateful he should be allowed to go,' he stated.

He advised Barnieh to learn from what happened to Benjamin Afutu, who also left under similar circumstances despite assuring that he was going to extend his contract and later had to return to the country after his Egyptian side terminated his contract and he is now without a club.

He said another player of the club, Patrick Razak, also did same and after his botched contract with Guinean side, Horoya AC, he came back begging to be accepted into Hearts.

He, therefore, advised Barnieh to learn lessons from those instances.