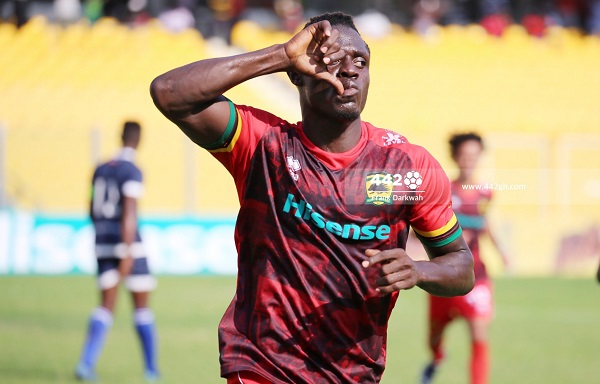 Kwame Opoku is one of six players of Asante Kotoko included in the squad
30.5k Shares

Ghana will take on the Bafana Bafana away before playing host to Sao Tome and Principe in the final Group C qualifier.

The Black Stars are tied with South Africa on nine points and the top of the group standings with two games left. The 32-man squad will be joined later by foreign-based players for the qualifiers.

The squad is dominated by players of Kumasi Asante Kotoko who had six call-ups, with the Accra Great Olympics, Medeama and Ebusua Dwarfs contributing three players each.

Surprisingly, three players from the second-tier league caught the eye of the national coach, with forwards Evans Etti (Accra Lions FC), Andy Kumi Francis (Unistar Academy) and Welbeck Takyi (Tano Bofoakwa) all making it into the squad who are due to commence camping on Monday.

coach (sports) someone in charge of training an athlete or a team More (Definitions, Synonyms, Translation)