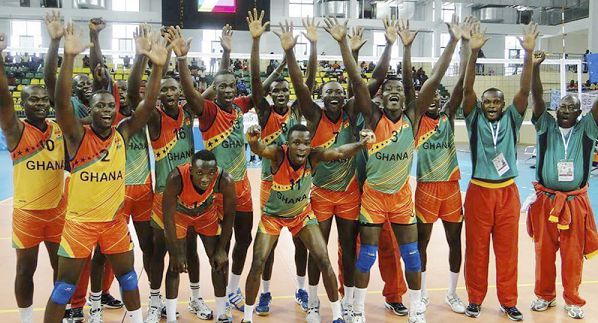 The dream of Ghana male volleyball team, Black Spikers, to participate in the upcoming All Africa Games in Morocco hit the rocks after they failed to raise the $8,000 participating fee and per diem for players and officials.

The team, which had been in camp a month ago preparing for the competition, were scheduled to leave last Friday for Cote d’Ivoire to participate in a one-week qualifying series involving powerhouses Nigeria, Burkina Faso, host Cote d'Ivoire and Niger.

After converging on the El Wak Stadium in Accra where they were supposed to depart, they were hit with the bad news that the government could not raise the needed $8000 for them to play in the qualifiers.

A distraught team coach Abdul-Rahman Danladi told Daily Graphic, in an interview, that both players and officials had been hard hit about their failure to participate in the qualifying series.

" The future of the sport is now in doubt. I see this as a sabotage. We claim we will be hosting the competition in 2023 in Ghana, but ironically we can't even qualify to participate in this year’s tournament just because of only $8,000." he bemoaned
"We are considered one of the key players in the continent, so far as volleyball is concerned .

This is because we are currently ranked ninth in Africa. We have prepared very well for this competition and our chances of coming home with a medal from the All Africa Games was very huge but all our effort have come to nothing now,” he noted.

For his part, the treasurer of the Ghana Volleyball Association, Mr Divine Edem Dotse,alleged that there was a deliberate attempt to kill the sport.

Explaining, he said, they used their own resources to fund the recent beach volleyball championship, which they won gold and were, therefore, expecting the state to support them this time but their hope had been dashed once again.