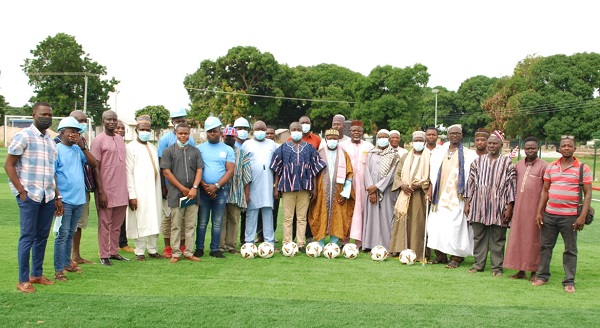 Afro-Arab Properties & Construction Limited has constructed and delivered a FIFA standard Astroturf facility to the people of Yeji in the Pru East District of Bono East Region.

Funded by the Ministry of Inner-City and Zongo Development, the facility was handed over to the Chiefs and people of Yeji at a short presentation ceremony on Thursday.

The facility was constructed under a partnership agreement between the Afro-Arab Group and Honourable Mustapha Abdul Hamid, the then Minister of Inner-City and Zongo Development

The District Chief Executive Officer of the Pru East Assembly, Joshua Abonkra, receiving the keys to the facility on behalf of the people, applauded the Afro-Arab Group for constructing a pitch that he said will soon produce world-class footballers.

"I am very much happy for this project and I must also thank the Afro-Arab Properties and Construction under the leadership of Alhaji Salamu Amadu for the good work done. Getting such an edifice in our community means a lot to us. I can assure you that this pitch will help us to unearth more talents from Yeji and its surrounding towns. The Contractors has officially handed it to us and I want to assure them that we would manage and ensure a good maintenance culture for this facility,” he said.

Mr. Abonkra, further appealed to the group for more support to the district emphasizing that his office will continue to collaborate with Afro-Arab Properties and Construction for future projects in the district and region.

According to the DCE, the vast majority of Ghana's football stars were developed from the area known formerly as the Brong Ahafo Region, a reason why such facilities are very relevant for that geographical area.

Speaking on behalf of the Afro-Arab Group, Cephas Kwaku Forfoe, stated that the company believes in quality and therefore the project was executed with the best of materials to ensure a long lifespan.

The Chiefs and Opinion leaders expressed their heartfelt gratitude to the Afro-Arab Properties and Construction Limited, a subsidiary of the Afro-Arab Group under the supervision of Alhaji Salamu Amadu, for their support and commitment to community development.

“We want to say that we are grateful and you shall hear good news that this Astro turf has brought a lot of improvement to this district,” they stated.