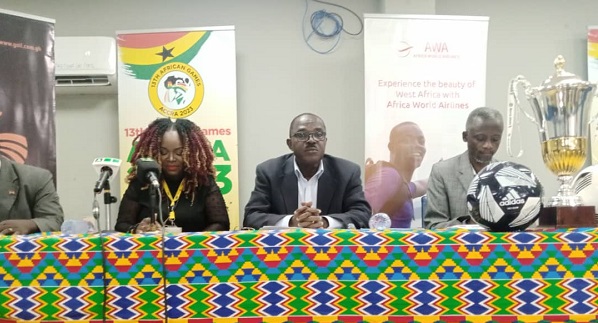 The Executive Chairman of the Local Organising Committee (LOC) of the 2023 African Games, Dr Kwaku Ofosu Asare, has disclosed that the Borteyman sports complex will host all indoor events during the games, while the Legon Athletics Oval hosts athletics and rugby.

He said the University of Ghana campus would be the Games Village for the entire event, adding that events such as road shows and selection of athletes to represent Ghana would be done in May and June this year.

“We have a very important task and a huge responsibility of hosting the best-ever African Games and making this nation very proud,” he noted.

Dr Asare made these remarks at the media centre of the Accra Stadium yesterday when he presided over the official launch of the African Games football competition for eight Muslim communities in the Greater Accra Region.

According to the LOC chairman, the aim of the competition was not only to celebrate the end of the Muslim fasting month of Ramadan but also to mark the beginning of an awareness creation of the upcoming Games.

“After this games, we will move to the other regions to create more awareness of the African Games. We are determined to make this African Games a memorable one,” he assured.

Dr Asare said the two-day competition slated for the Madina Astro Turf on May 14 and 15 would see all players from the eight communities receiving an appearance fee.

Launching the Sallah Games on behalf of the Minister for Youth and Sports, Mr Mensah Bonsu, an official of the ministry affirmed his outfit’s support for the event.

He stressed the need for such competitions to be sustained and added that the ministry was assiduously working with the LOC to churn out the best African Games in the continent’s history.

Balloting for the event paired Maamobi against Shukura in the first match, while Madina take on Accra New Town in the second match.
Cow Lane will play Fadama in the third match, before Nima take on Tudu in the fourth match.