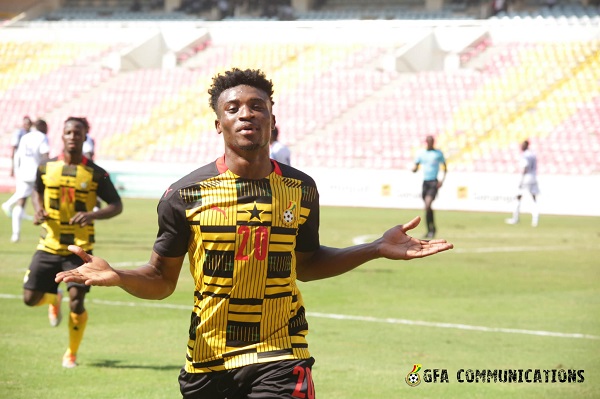 The match, played on a neutral ground as a result of CAR’s failure to provide an approved venue for the game, saw Ghana opening the score line as early as the 17th minute through a volley by mercurial midfielder, Mohammed Kudus.

A swift exchange of passes among Felix Afena Gyan, Osman Bukari and Kudus at the right flank saw the latter latched on to the ball at the edge of the box, beating his marker before he released a left-footed volley which caught goalkeeper Aladun Kolimba in post for CAR off guard.

Fight back
CAR, however, fought gamely and levelled up in the 41st minute through Keri Namnganda when he connected a midfield pass from Brad Thomas Pirioua to bring his side at par.

Ghana started the game with the Ayew brothers, Andre and Jordan, together with Abdul Fatawu Isshaku and Kamaldeen Sulemana who all started in the first game against Madagascar, missing from the starting XI.

The changes, however, did not affect the performance of the Black Stars, especially at the early part of the game as they made early incursions into the territory of the CARs with most of the new guys hoping to catch the eye of the coach.

As the Black Stars continued to test the defensive set up of the host, they made their first threat in the 6th minute but Kofi Kyere failed to take advantage of a fine opportunity to put Ghana ahead when he fired wide much to the relief of the host.

The CAR continued to defend their territory well to keep the Black Stars at bay but in the 10th minute they also countered beautifully when Youmbi Jacob was put through but Jonathan Mensah was alert to deal with the threat.

Left off the hook, Ghana continued to push more men forward, forcing their opponents to chase their shadows. Their effort paid off in the 17th minute when Kudus broke lose at the vital area of CAR, beat two markers before firing a volley which caught Kolimba flat footed.

In the 41st minute, CAR levelled the score line when Keri Namnganda latched onto a pass from Brad Thomas Pirioua in the midfield and fired the ball beyond the reach of goalkeeper Lawrence Ati-Zigi to end the half.

CAR resumed the second half full of determination and came close to increasing the tally in the 48th minute when Ben Thibaut beat his marker and fired from a close angle which missed the post by inches.

Coach Addo was forced to make some tactical changes in the 55th minute after Peter Guinari collided with Ghana’s Jonathan Mensah during an aerial challenge which halted the game for well over seven minutes to allow the Ghanaian to receive treatment.

When the match resumed, Gideon Mensah’s mistake nearly cost the Black Stars when goalkeeper Ati Zigi had to rush to clear a dangerous back pass. Ghana then controlled the game in search of the much-needed winner which eluded them.