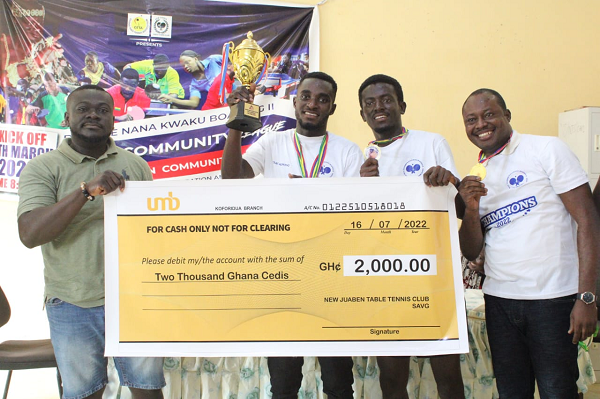 The winners with their cheque
30.5k Shares

Team Adweso won the league after securing 32 points, leaving their closest competitors Nsukwao Hustler Loopers in second place with 30 points after 12 games within the 14 weeks of the competition held in Koforidua, the Eastern Regional capital.

The Eagle’s Nest won 10 games and lost twice to be crowned champions last Saturday, July 16, 2022 as the champions of the maiden edition of Daasebre Intercommunity Table Tennis League.

As the winners of the tournament, Adweso Eagle’s Nest lifted the coveted trophy, with team members going home with gold medals and a cash prize of GH¢ 2,000.

The Chairman of NJTTC, Mr Felix Adjetey Sowah lauded the teams for their competitiveness, commitment and display of talent throughout the tournament and urged them to be more focused and disciplined to become national assets.

He expressed satisfaction at the recognition of NJTTC as a hub for great table tennis players, as the Club would have one of its talents, Emmanuel Asante of the Ghana Immigration Service, representing Ghana at the upcoming Commonwealth Games after being crowned the best place of the tournament.

He urged the players to by dint of hard work, pursue their dreams of becoming great table tennis players and national heroes.

Emmanuel Asante, 27, in an interview with Graphic Online expressed gratitude to the club for organising the tournament; adding that the competitiveness of the tournament had helped to also prepare him immensely towards the upcoming Commonwealth Games in the United Kingdom.

He added that his focus is to win a medal for the country and make Ghana proud; urging Ghanaians to rally behind the table tennis team as they chart the path to win a medal at the Commonwealth Games.