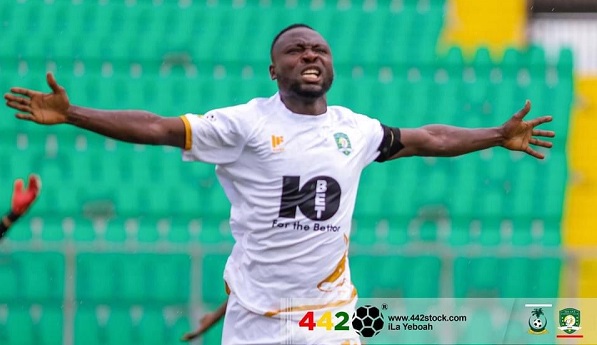 Aduana FC played a more determined game to snatch the maximum points from Hearts of Oak in their crucial betPawa Ghana Premier League opener at the Nana Agyemang Badu I Park at Dormaa-Ahenkro yesterday.

It was skipper Bright Adjei’s 49th minute goal that burst the bubble of Hearts and broke Aduana’s 12-match winless streak in their fortress.

With in-form Daniel Afriyie Barnieh, Gladson Awako and nimble-footed Suraj Seidu in the thick of affairs, and Coach Samuel Boadu directing affairs from the touch line, Hearts started the match with vigour, but Aduana matched them squarely and prevented them from causing any havoc.

Aduana FC also attacked from the flanks but with Mohammed Alhassan marshalling forces in the Hearts defence, the homesters found it difficult to break through.

After the break, Aduana managed to break the deadlock when Adjei pounced on Sam Adams’ volley to fire home to the admiration of the massive home crowd.

Down by a goal, the Phobians began to attack in droves in a bid to redeem the goal but Aduana remained resolute in defence.
Hearts, however, ended the game with 10 men when defender Caleb Amankwah was sent off for a rough tackle.