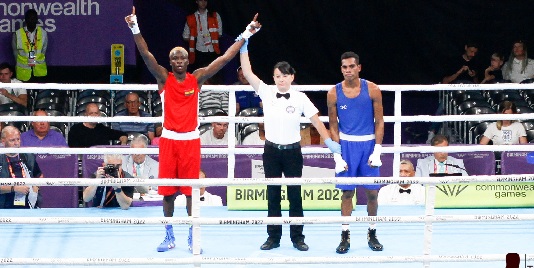 Boxing duo of Abdul Wahid Omar and Joseph Commey have qualified to the quarter finals of the ongoing Commonwealth Games in Birmingham.

Wahid and Commey both earned stoppage victories over their opponents as Team Ghana chase medals in boxing.
The 2014 Commonwealth Games bronze medalist tore apart his opponent Papua New Guinea’s Elia Rokobuli in two rounds of their light welterweight contest.
In a featherweight Round of 16 clash, Commey destroyed Allan Oaike of Papua New Guinea in two rounds.
Commey, who has promised a knockout win over his opponent, praised his trainer for technically guiding him to win the bout.
“I got confused in the early stages of the bout because of the way my opponent was fighting,” Commey told the Daily Graphic.
“I am taking it one fight at a go and I am confident that we will win the gold that we came for.”
Meanwhile, Bombers trainer, Kwasi Ofosu Asare said the team was on the right path to winning medals for the country.
He explained that he was looking forward to recording more victories with the rest of the boxers that are due to fight.
“I am very happy with Commey’s win because it puts us in good standing in our quest to win a medal.
“We are very focused and confident that our aim would be achieved at the end of the day.”
Follow @Graphicgh