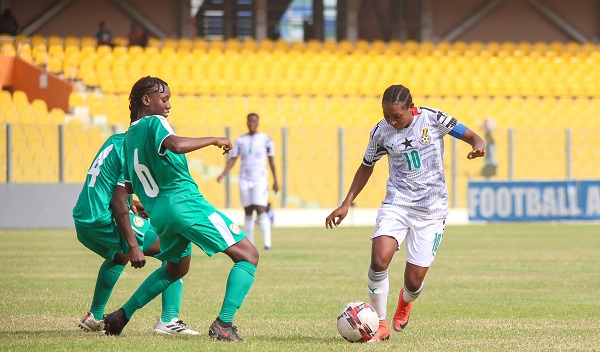 An improved second half display saw the Ghana’s female Under-17 side, the Black Maidens beat Senegal 3-0 and 4-0 on aggregate to advance to the next round of their 2022 FIFA Women’s World Cup (WWC) qualifying campaign.

Yesterday at the Accra Stadium, where they hosted the second leg, Coach Baba Nuhu’s Maidens completed a double win, having won the first 1-0 in Senegal two weeks ago.

Not even the bravery from the Senegal goalkeeper, Adji Ndiaye, nor Maidens’ playing with a numerical disadvantage at a point, could affect the performance and ultimately the scoreline, as the Ghanaians cruised to victory in the two-leg tie.

It was a hard-fought win that saw the Maidens scoring all their goals in the second half after a resilient performance from the Senegalese, particularly the goalkeeper, in the first round, that saw them keep any trouble at bay.

However, that was not to last as right from the restart of the game after recess, the Maidens stepped up the tempo of their game, harassing the Senegalese goal area and that paid off, resulting in goals from captain, Georgina Ayisha Aoyem, (49th) Princess Owusu (59th) and Kareema Abdulai (74th) that comfortably cushioned them into the third round of the campaign.

It was not just about the goals that were scored, but the improved cohesion in the play of the team which saw the Maidens make more incursions in the final third of the Senegalese.

But for their superior performance, it could have been an anti-climax for Ghana as Owusu, whose goal put the Maidens 2-0 up, which also made her the topscorer so far in the campaign with two goals, was shown the red card on the 72nd minute for a needless rough tackle on an opponent.

Dissatisfied with their first leg output, their first game since the campaign began,  Coach Nuhu had promised to get his team to do better and he delivered on his promise.

They strung their passes better, held on to the ball and released the ball more quickly as they made incursions into the Senegalese goal area. The visitors had their goalkeeper Ndiaye to thank for saving them from returning with a cricket scoreline with her great anticipation that foiled many scoring chances.

Now through to the third round, the Maidens will play either Guinea or Liberia who are tied 2-2 from the first leg and who were scheduled to honour the second leg tie in Conakry yesterday

The Maidens are eyeing a seventh straight berth at the Under-17 WWC having made their debut at the inaugural competition in 2008 and also won bronze in the third edition in 2012.

There are three slots for Africa for the 2022 tournament to be staged in India from October 11 to October 30.