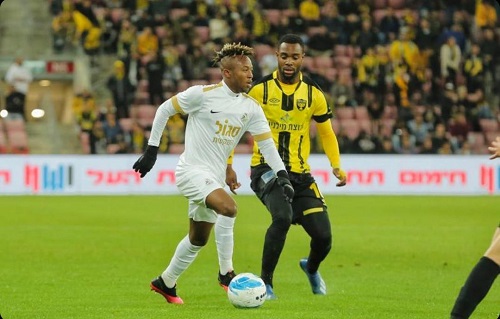 Samuel Alabi has signed a four-year deal at Ashdod FC

Alabi, 20, joined Ashdod this season on loan from Ghana Premier League side Dreams FC and has put up some fantastic display which has seen him being nominated for the player of the year award.

The nimble-footed midfielder is happy with his new contract and has promised to go all out as his stock continues to rise.

"I am very happy with this new contract, it has been a good first season for me but I believe I can do more as time goes on," Alabi told Graphic Sports Online.

"This permanent contract is actually a dream come through. I will keep doing my best."

Alabi further revealed that his maiden season outside Ghana has not been easy but with determination he has been able to prove his worth.

"It has been a little bit difficult because of the new environment, new teammates, different coaches, and different languages and in all is like you starting a new life.

"So, I just told myself that this is the opportunity I have waited for long and I must make things happen. Truly I have not disappointed," he added.

Alabi progressed from Still Believe FC, the developmental team of Dreams FC, to the senior side in 2017 and featured in the 2018 Ghana Premier League which was abrogated.

Although a midfielder capable of playing in defensive and in midfield positions, the player is equally effective on the wings and as a right-back.

He has made 17 appearances in the Israeli Premier League this season with one goal and an assist to his credit.