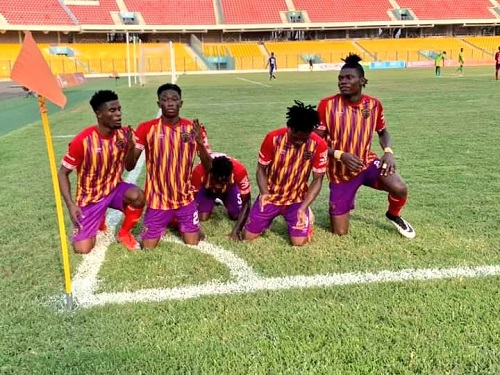 Hearts of Oak players celebrating one of their goals Follow @Graphicgh

Accra Hearts of Oak capitalised on their numerical advantage to record their heaviest victory of the season after beating league leaders Bechem United 6-1 at the Accra Sports Stadium last Saturday.

Victor Aidoo hit a brace, with Abdul Manaf, Abdul Lawali, Ansah Botchwey and Benjamin Afutu all finding themselves on the scoresheet to hand the Phobians their second consecutive win this season.

Bechem United had gone six games unbeaten and looked the most promising side until they were reduced to 10 men in the 38th minute.
Emmanuel Asante who was already on a yellow card had to take an early shower as he was showed a second yellow card, but the visitors managed to defend their lines and maintain the scoreline into the interval.

Hearts of Oak came back from recess more determined to break the deadlock and it didn’t take too long for Abdul Manaf Umar to register the opener in the 52nd minute.

Substitute Victor Aidoo increased the tally in the 60th minute and provided the cushioning 13 minutes later.

Six minutes before time, Daniel Afriyie was brought down in the penalty box by Bechem United goalkeeper, Prince Asmepa, and Frederick Ansah Botchway connected from the spot to make it 4-0.

A moment of lack of concentration on the part of the Hearts defenders allowed Prince Adu Kwabena to pull one back after he beautifully chipped the ball into the net.

Hearts restored their four-goal advantage when ........... connected from a close range after which Benjamin Afutu Kotey scored just on the stroke of full time to end the game 6-1.