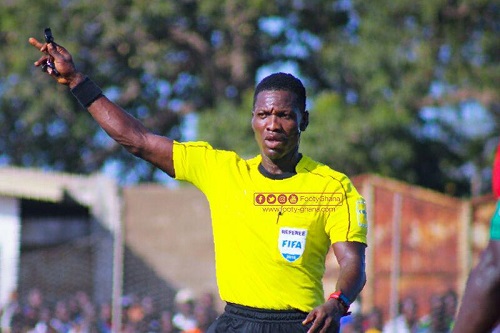 Referee Daniel Nii Laryea will be at the centre of the CAF Confederation Cup game between Moroccan side RS Berkane and Coton Sport FC of Cameroun on Wednesday.

The 33-year-old Referee Laryea who was officially named as the fourth official of the game has now been made the centre referee to replace Joshua Bondo of Botswana.

Laryea who has been ranked among the top 20 referees on the continent by CAF, has vast experience in handling international games, with his last game being the CAF Champions League game between Horoya and Wydad Casablanca last month as well as officiating in the Teungueth vrs Zamalek game in February.

He will be assisted by Eric Ayimavo Ayamr Ulrich from Benin as the Assistant Line I, while compatriot Kwasi Acheampong Brobbey will be the Assistant II and Noureddine El Jaafari from Morocco as the Fourth Official.