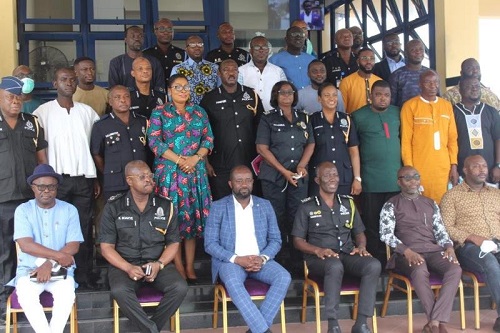 THE Ghana Police Service has held talks with officials of the Ghana Football Association (GFA) on ways to improve security at match venues and how to deal with persons or groups involved in match-fixing.

The meeting organised at the behest of the Inspector General of Police (IGP), Dr George Akuffo Dampare, welcomed the delegation of the GFA led by its President Kurt Simeon Okraku together with some Executive Council Members of the association and club owners at the Police Headquarters in Accra.

Assistant Commissioner of Police (ACP) Kwesi Ofori, the Director of Public Affairs, speaking to the media on the sidelines of the meeting said, the Police would take proactive security measures to ensure the safety of lives and property at match venues.

“The controlling idea behind the meeting is to see how best we can support the GFA in terms of protecting lives and property at the various stadia in the country and also deal with issues of violence at the stadiums.
“The Police will deploy sufficiently to confront such issues and deal with them according to law.

“Lastly, on match-fixing and match manipulations the Police have taken a strong stand. We have units at the Criminal Investigation Departments that deal with issues of corruption and anyone caught in line with match manipulation will be dealt with according to law. Our intelligence department will be placed at the disposal of the GFA to make sure that we the Police every aspect of the game," he said.

The General Secretary of GFA, Mr Prosper Harrison Addo, expressed gratitude to the Police Service for engaging them in talks that sought to tackle issues of safety and security at football venues.

He said the Police have contributed massively to the smooth running of football in the country and these deliberations would further strengthen the relationship between the two institutions.

According to Mr Harrison Addo, the IGP had assured them of dealing drastically with hooligans and match manipulation who intended to put the game in disrepute.

“There will be a collaborative task force to ensure the flow of information between the two bodies to enable the Police to work effectively for us. So the football ecosystem will position itself to provide the needed information and urge all clubs to assist in providing information, especially on hooligans,” he noted.