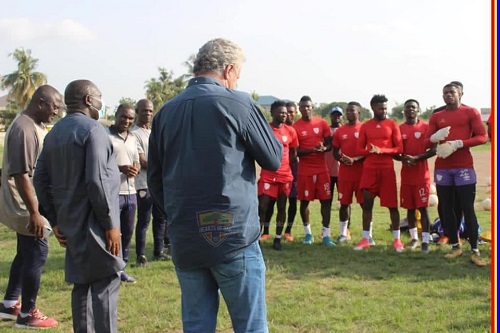 Accra Hearts of Oak new coach, Kosta Papic, met the playing body for the first time as they prepare for the next game.

The Phobians are expected to play Karela United on Friday for their third game of the season after drawing 2-2 with Ashgold and losing 0-1 to Inter Allies last Sunday.

Papic, the 60-year-old Serbian arrived in the country last weekend after agreeing a deal with the managers of the club to take over as the head coach.

Currently the team is being handled by stop-gap coach, Edward Odoom, who stepped into the shoes of Kim Grant after he was dismissed last December.

He is expected to be in the dug out of Hearts of Oak when they play at the Accra Sports Stadium during Friday’s game against Karela and to inspire them them for their first win of the season.

Papic is returning to the club for the second time after he parted ways with Hearts of Oak midway through the 2008/09 season for Nii Noi Thompson who took over and guided the club to win the league that season.