Nkegbe rejects decision to drop him from Paralympics 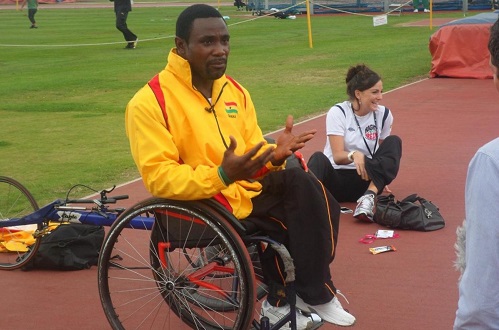 Wheelchair racing athlete, Raphael Botsyo Nkegbe, says the decision by the governing board of the National Paralympic Committee Ghana (NPC-Ghana) to exclude him from Ghana’s team to the upcoming the Paralympic Games was only to satisfy their personal interest and not in the best interest of the nation.

NPC-Ghana president, Samson Deen, explained to the Daily Graphic that it was a collective decision by the board, through voting, when faced with a choice between Amadu and Ghana’s most decorated Paralympian, both of whom made the qualifying time at the same event in 2019.

“IPC [International Paralympic Committee] then wrote to us informing us that we do not have any athlete who had made automatic qualification but Ghana will be considered to present one athlete,” he said.

His disappointment notwithstanding, Nkegbe says he is fully behind the athletes who have been given the opportunity to represent Ghana at the August 24 – September 5 games in Tokyo.

“All those who are there are Ghanaians and I wish them the best of luck. For the NPC leadership, they made the choice because they wielded the power as a board, but to be honest it’s not a decision most Ghanaians would agree with because the best of Ghanaian athletes need to represent the country,” said Nkegbe who had competed for Ghana in para sport since 2003.

Sounding very dejected, Nkegbe told the Graphic sports that he had trained very well and was looking forward to winning Ghana’s first medal at the Paralympics, having previously competed at the Athens 2004, Beijing 2008 and London 2012 Paralympics.

Although a bitter pill to swallow, the reigning SWAG Sports Personality of the Year is taking it as a man and looking forward into the future with hope.

“It’s the decision of the NPC board that this is what they feel that is the best for them,” he said.

For Nkegbe, although two athletes made the qualification mark, he felt the NPC-Ghana board, when faced with a choice between him and Amadu who represented Ghana in high jump (T42 class) at the Rio 2016 Paralympics, should have picked the athlete with the best qualifying mark.