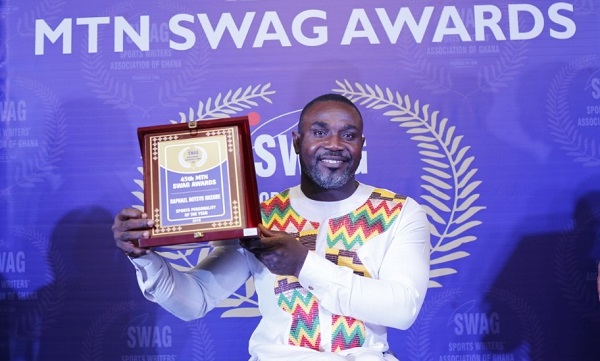 Sports Writers Association of Ghana (SWAG) Personality of the Year, Botsyo Nkegbe, has set his sights on an Olympic Games gold medal to crown his successful career that spans well over a decade.

“The dream of winning the first Paralympic medal for Ghana is still on. I have been to Athens 2004, I’ve been to Beijing 2008 and London 2012 and I haven’t won a medal for Ghana in that competition yet. I don’t want to be a spectator, I want to be a competitor and that means I have to win a medal”, he told Graphic Sports in an interview yesterday.

SWAG crowned the 35-year-old wheelchair racing athlete with the topmost award last Saturday having, exceptionally, distinguished himself in the sport during the year under review. He won four gold medals in the 2019 Dessert Challenge in USA, 2019 Atlanta Open, USA, and 2019 and 2020 OCC Marathon in South Africa.

His unusual feat followed in the footsteps of fellow para-athlete Ajara Mohammed, who won the 2011 MTN SWAG Sports Personality of the Year award.

Nkegbe admitted that but for the assistance of some organisations and benevolent individuals, these achievements wouldn’t have been possible and believed if the country would extend similar gesture to them they could achieve even bigger things.

“Corporate bodies are doing their part but I expect that more would come from government. Last year was a great year for me because the National Sports Authority gave me accommodation in Cape Coast and paid part of my ticket fare for me”, he said.

The physically challenged athlete said he had never seen his disability as inability and believed those using their physical deformity to beg on the streets to challenge themselves and begin to see the ability in them instead of their inability.

“They should look for the ability within them, there are so many things they can do apart from being on the road side begging, because if you make a decision to limit yourself to some aim it means you are not ready to explore other things”, he advised.

While appreciating the honour bestowed on him by SWAG, he was of the view that his long wait for the honour had paid off after years of being expectant of the gong and feel highly motivated to achieve more.

“This award is a good motivation for me because it has taken 17 years of waiting for it. But the right time is when you have the award in your hands. It is also a motivation because this is the first time any male para athlete has been nominated in the two categories.