MŠK Žilina Africa FC off to Dubai for training tour 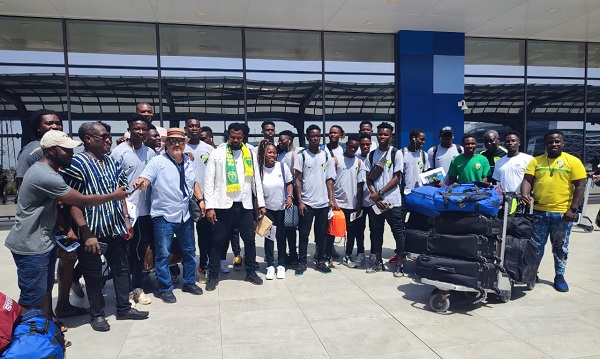 The contingent which comprised 16 players and four officials is scheduled to represent Ghana in a competition to commemorate the Muslim holy month of Ramadan and play friendly matches against topflight UAE sides such as Al Ain, Al Jazeera and Al-Nasr.

In total, MŠK Žilina Africa is expected to play a total of 10 matches before returning to the country on April 23, 2022.

Explaining the motivation for the trip while the Division Two season was ongoing, the President of MŠK Žilina Africa, Mr Ishmael Lamptey said it was vital for his young team to gain experience in international football.

He said this would not only enhance their careers but put them in the shop window and provide them with the opportunity to further their careers overseas.

"It's very important because we have realised that when our players are scouted to Europe at times they panic during trials and matches," Mr Lamptey said.

"This does not only affect MŠK but also our junior national teams where players struggle during international competitions".

He was also hopeful that members of the 16-man playing body would also catch the eye during their stay in Dubai.

Mr Lamptey added that there were no concerns that MŠK will drop down the Greater Accra Division Two table because there were equally talented players who will hold the fort while some team members were in Dubai.

The club was founded in 2018 and adopted the La MacDan town park as its official home grounds.