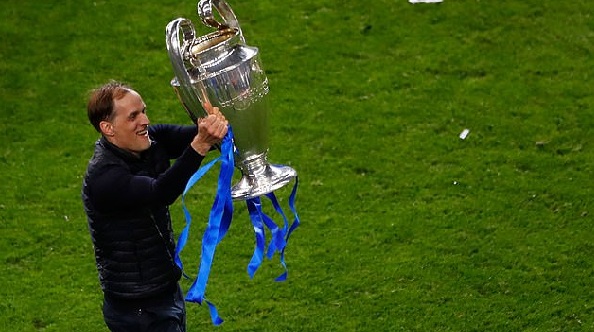 Thomas Tuchel has signed a contract extension with Chelsea until 2024 after guiding the Blues to the UEFA Champions League title this season.

The German only joined the west Londoners in January of this year, with Chelsea owner Roman Abramovich initially offering the former Paris Saint-Germain head coach an 18-month deal until the summer of 2022.

Tuchel also earned Chelsea a spot in the top-four having taken over with the club in ninth-place, while the Blues also reached the FA Cup final this season.

Tuchel told the Chelsea official website: 'I cannot imagine a better occasion for a contract renewal. I am grateful for the experience and very happy to stay part of the Chelsea family.

“There is far more to come and we are looking forward to our next steps with ambition and much anticipation.”

Should Tuchel fulfil his new contract at Stamford Bridge, he will become the longest-serving coach under ruthless Blues owner Abramovich.


The Russian businessman has dismissed 13 different Blues managers since taking over the club in June 2003 - including Chelsea's other Champions League-winning manager Roberto Di Matteo just six months after guiding them to European glory.

Iconic Portuguese boss Jose Mourinho holds the title of currently being the manager who Abramovich has stuck by the longest for, as his first Chelsea spell lasted just over three years between June 2004 and September 2007.

Tuchel would be the Chelsea boss for three-and-a-half years should he stay at Stamford Bridge for the duration of his new deal which expires at the end of June 2024.

Speaking about Tuchel's extension, Blues chief Marina Granovskaia added: “When Thomas joined us in January there was still so much to play for domestically and in Europe.

“He slotted in seamlessly and immediately became an integral part of the Chelsea family.

“Returning us to the top four in the Premier League was crucial, and we could not be happier with our success in the Champions League which crowned a remarkable season at Chelsea.

“We are obviously extremely pleased therefore to retain Thomas for a further two years, and look forward to more achievements in the coming seasons.'

Tuchel has earned his new deal after just 30 matches in charge of the Blues, with the German earning 19 victories for Chelsea since January.