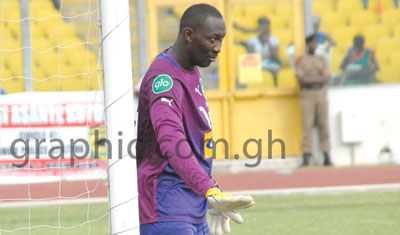 Kotoko are desperate to end the long period of continental honours drought and the supporters see Sunday’s game as a good step for them to portray the venom they carry into the competition.

The soft-spoken trainer has remained resolute in his drive in spite of some amount of criticisms about his tactics from a section of the fans.

He seemed to be on track with his game plan in Africa and perhaps that explains why he insisted that he  was under no pressure whatsoever ahead of tomorrow’s  game.

The coach may not spring any selection surprise and would rely on  his tried and tested materials.

Akuffu provided plenty of drive and together with Asante they  should  take control of the centre of midfield and push the attack into the goal area.

Bejaia have promised to give Kotoko a run for their money and as their coach Giovanni Solinas said the two teams are starting the game on the same footing having drawn goalless in the first leg.

The fact that they rejected the training field provided them by their hosts and chose to train on a school field testified to the plans they had under their sleeves.

And even though  the Algerians have commended Asante Kotoko for the nice hospitality given them so far they are not convinced that Kotoko have what it takes to eliminate them.

They have been training in the scorching Kumasi sun to get acclimatised as the match will kick off at 2pm.

Nonetheless, Kotoko appear favourites and with the motivation from the K.K. Sarpong-led management, they have no reason to disappoint.