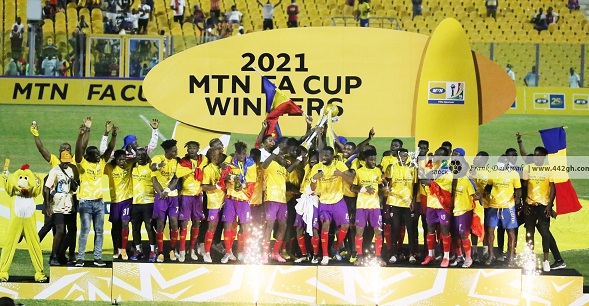 Accra Hearts of Oak wrapped up a successful season when they defeated AshantiGold 8-7 on penalties yesterday to win the MTN FA Cup and complete a domestic double having claimed the Premier League title last month.

Yesterday's final at the Accra sports Stadium was closely fought as they two sides failed to score after two hours of exchanges, and it took the lottery of penalties to separate them and also end a 21-year title wait.

More drama was reserved for the tie-breaking shootout after the title was left in the hands of the two shot-stoppers as all the on-field players had taken their turns with the game tied at 7-7 after 10 kicks apiece. Incidentally, the 11th kick by goalkeeper Richard Attah secured the Phobians their 11th FA Cup glory after his opposite number, Kofi Mensah, wasted his chance.

It sent the Phobian faithful into delirium as they revelled in what has been an amazing season in which they showed amazing form and fighting spirit since the arrival of Coach Samuel Boadu to turn their fortunes around for their 21st league title -- their first triumph in the last 11 years.

However, it was goalkeeper Attah who turned out as the star of the marathon penalty shootout after saving three kicks and scoring the deciding kick of the night. Fatawu Mohammed, Emmanuel Nettey, Robert Addo Sowah, Mohammed Alhassan, Victor Aidoo, Raddy Ovouka, Ibrahim Salifu and Attah scored in the shootout for Hearts whereas Ampem Dacosta, Stephen Banahene, Frank Akoto, Yaw Annor, Opoku Agyemang, Amos Nkrumah, and Richard Agyemang converted for AshantiGold.

The match started on a bright note for both sides but it was Hearts that came close to opening the scoring in the opening five minutes when Patrick Razak failed to reach a through ball from Isaac Mensah.

AshantiGold came into the game stronger after and possessed the game without creating any clear-cut chances.

In the 11th minute, Razak was presented with another chance to score the opener for the Phobians but his shot from close range went wide.

Five minutes later, in-form midfielder Benjamin Afutu found his header hit the post in what proved to be the best chance of the half.

AshantiGold took over the game and dominated play but a solid Hearts defence were alert to prevent the Miners from troubling goalkeeper Attah.

The Obuasi-based side through forward Amos Addai and Seth Osei troubled the Phobian defence but midfielders Caleb Amankwah and Frederick Ansah Botchway covered well for their defenders.

After recess, Coach Boadu's side went straight in search of a goal with Afutu missing the target with a header in the 49th minute.

AshantiGold didn’t stop threatening the Hearts defence had their best chance of the second half through striker Addai whose low shot was saved by Attah.

The thrilling encounter between both sides continued but in the 61st minute, Hearts’ Congolese import Raddy Ovouka dribbled past his opponent’s backline only to see his shot parried away by Ashantigold goalie Kofi Mensah.

In an entertaining encounter, the two Premiership sides failed to get past their opponents' defences in the final minutes of the game. However, Hearts forward Daniel Afriyie Barnieh nearly stole the show for his side on stoppage time but his shot narrowly missed the target taking the game to extra-time.

AshantiGold started the extra time on a bright note through a counter-attack in the 102nd minute, but Seth Osei’s goal-bound shot was cleared by defender Mohammed Alhassan.

The game progressed to the end of extra-time without both sides failing to locate the pole leading the game to be decided in a shootout.