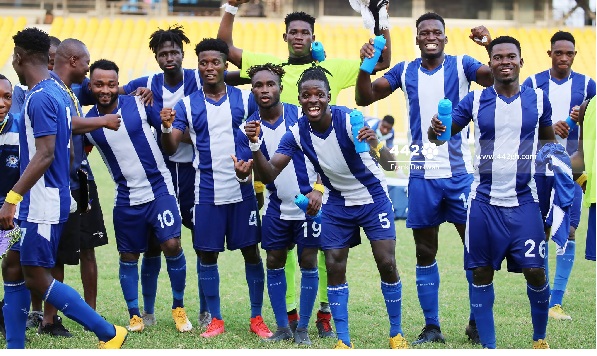 Two quick goals in the opening 20 minutes won Great Olympics the bragging rights over Hearts of Oak in their regional Premier League derby at the Accra Stadium on Saturday.

The win also helped them leapfrog Hearts on the league log into third position with the Phobians dropping to sixth place after 11 matches.

In an expected tough encounter, both sides came into the game prepared to earn something but it was Olymnpics who took the first bite when Awako netted a freekick on the edge of the box.

The freekick had been awarded to Olympics after referee Charles Bulu adjudged Hearts’ Nuru Sulley to have tucked the shirt of striker Maxwell Quaye.

Three minutes later, Samuel Quaye set up his elder brother for Olympics second goal after his cross was volleyed in by Maxwell Quaye.

The two early goals unstable the Phobians whose attempt for an immediate comeback failed to materialise. It was Patrick Razak who went close in the 25th minute but his shot went wide.

With Hearts dominating play in search of a goal, the Wonder Club’s defence were alerted to prevent the Phobians from coming into the game in the first half.

Razak went close to pulling one back for Hearts immediately after the recess but his shot was denied by the woodwork. The Phobians at the stage were desperately in search of a goal to comeback into the game but Manaf Umar’s strike from long range failed to hit the target.

In the 57th minute, Victor Aidoo’s fine header was parried by Olympics’ Salifu to deny Hearts what could have been a fine opportunity to come into the game.

The Phobians did not give up and continued pressuring for a goal. After 68 minutes, Hearts Congolese defender Raddy Ovouka was fouled in the box but referee Bulu overlooked it.

Olympics had their chance to go 3-0 up but Maxwell Quaye missed the opportunity to score his second brace of the season when he lobbed the ball over the goal post.

In an entertaining fashion, the Wonder Club’s defence proved to be resilient to deny any further threats by the Phobians to earn a precious victory over their archrivals.

The win leaves Olympics in high spirits ahead of their home game with King Faisal at the Accra Stadium whilst Hearts travel to Tarkwa to face Medeama.