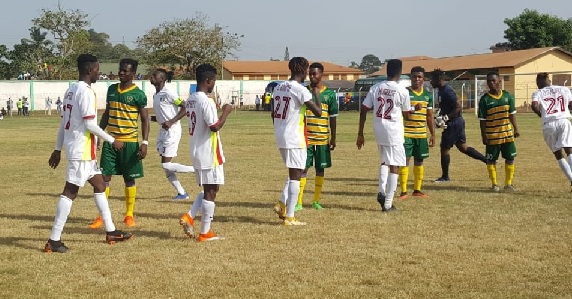 Players of both teams exhanging handshakes before the start of the match
30.5k Shares

Techiman Eleven Wonders recorded their first Premier League win of the season with a 2-0 win over 10-man Ebusua Dwarfs at the Ohene Ameyaw Park on Friday.

The hosts were reported to have thrown caution to the wind after disregarding a directive of a closed-door match by allowing fans into the stadium.

Wonders scored from a spot kick in the 31st minute through Mohammed Tetteh Nortey before Prince Okraku’s fine strike on the 90th minute earned the hosts a deserved victory.

Referee Joshua Samadji awarded a controversial penalty to the home side after the ball was believed to have struck the chest of a Dwarfs’ defender.

Nortey elected went for the ball and made no mistake to put Wonders in front after the half hour mark.

Despite the lead, the home side were relentless, creating more chances but had to head into the break with the slim lead.

Dwarfs were reduced to ten men in the second half after Prince Kpodo was sent off with 15 minutes left.

Eleven Wonders took advantage of the red card as Prince Okraku netted his second of the campaign to hand them a 2-0 victory.