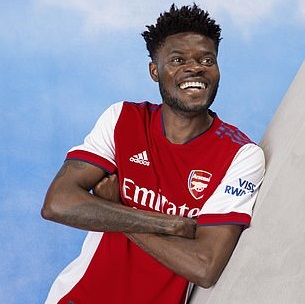 Arsenal star, Thomas Partey, were among a host of Gunners players who unveiled the team’s new home kit for the upcoming season.

The Adidas kit which was unveiled this week saw the likes of skipper, Pierre Emerick Aubameyang, England star, Bukayo Saka, Kieran Tierney and Emile Smith Rowe all joining in launching the home kit.

The new kit is made in the traditional colours of red and white and the Gunners are hoping the improved kit quality will reflect in their performance next season.

Partey who joined the north London club last season after Arsenal triggered his £45m release clause on transfer deadline date, first used the home kit on Tuesday when the club played in their 1-2 loss to Hibernian in a preseason game.

The Ghana international is expected to don the new home kit as Arsenal take on Steven Gerrard’s Scottish Premiership champions as part of the Ibrox club’s 150th anniversary celebrations.