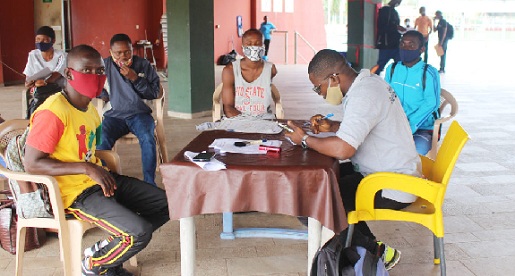 Some of the athletes going through the vetting process
30.5k Shares

The National Sports Authority (NSA) has begun the vetting process for athletes selected by their various federations for the Youth Employment Agency (YEA) and the authority’s stimulus package at the Accra Sports Stadium.

According to Mr Kwame Baa Mensa, the chairman of the vetting committee, the process formed part of the requirements in the Memorandum of Understanding (MoU) between the YEA and the NSA, which sought to support elite athletes in the country.

In an interview with some of the athletes at the vetting grounds, they expressed their gratitude to the state for coming to their aid in this era of the COVID-19 pandemic.

They stated that the package would boost their confidence to give off their best in local and international competitions.

The NSA and YEA, a fortnight ago signed an agreement to support Ghanaian athletes as part of government’s stimulus package for sports.
The vetting is expected to end next month.

In a related development, the president of the Ghana Olympic Committee (GOC), Ben Nunoo Mensah, says the GH¢500 stipend earmarked for the nation’s elite athletes is specifically for sportsmen and women who are not state employees or employees of the various security agencies, reports Kwame Larweh.

Despite being the initiator of the project, he said his outfit would be entirely absolved from the distribution and sharing of the money.

"All that we at the GOC want is transparency and equitable distribution to all sporting federations," he stated.

"We are looking at going beyond 1,000 athletes to support more athletes," he revealed.

He appealed to other corporate entities to help support athletes during the pandemic and beyond.

He also asked for a serious attitude towards sports development in the country.