Night of honour for Mahatma, Dramani 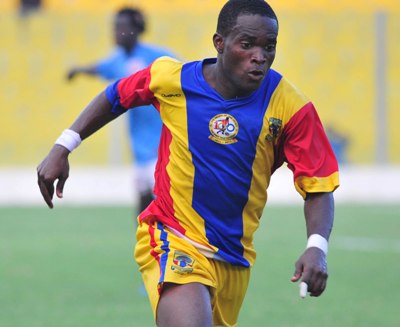 Barely a week after guiding Kumasi Asante Kotoko to a record 22nd league title, Coach Mas-Ud Didi Dramani will walk chest out to be decorated not for his maiden Premier League triumph last Sunday, but for another historic feat with the Black Maidens which earned the quiet tactician an honour at Saturday’s MTN SWAG Awards.

Also sharing the podium to be celebrated will be Accra Hearts of Oak captain Mahatma Otoo whose goal-scoring qualities were laid bare in the just-ended season when he emerged the top scorer (Goal-King) with 20 goals.

In fact, Otoo and two other outstanding players on the local scene, Amidaus Professionals’ Yahaya Mohammed and Michael Akuffo of Kumasi Asante Kotoko, will vie for the coveted SWAG Premier League Player of the Year title.

Despite their individual contributions to their clubs’ fortunes, Otoo’s remarkable achievement of powering the Phobians from the threat of relegation at the end of the first round to an enviable fifth position in the league could give him an edge over his competitors.

Otoo, the livewire of the Hearts team, is expected to pick two awards, including the Goal-King on a night that promises to draw some of the heavyweights in the world of sports in the country to the Banquet Hall of the State House in Accra.

Also battling for recognition will be Ghanaian internationals, Kwadwo Asamoah of Juventus, Andre Dede Ayew of Olympique Marseille and Emmanuel Clottey — who currently plies his trade with UAE side Al Dhafra — for Player of the Year.

Coach Dramani will be named Coach of the Year after guiding the Black Maidens to a historic third position in the 2012 FIFA U-17 Women’s World Cup, while the skipper of the side, Priscilla Okyere, will be named Female Footballer of the Year.

Moses Odjer of Tema Youth is expected to be crowned Most Promising Player of the Year, while Berekum Chelsea’s impressive show in their debut of the CAF Champions League earned them the Club of the Year award.

A member of the Women’s League Board, Samson B. Donkor, will also be honoured for his contribution to the development of women’s football, while Paralympic athlete, Anita Fordjour, receives a special honour for her performance at the 2012 Paralympic Games.

Awards will also be conferred on 20 sportsmen and sportswomen for excellence in different sporting disciplines.