Hearts of Oak ready to unleash Gladson Awako, others in CAF Champions League 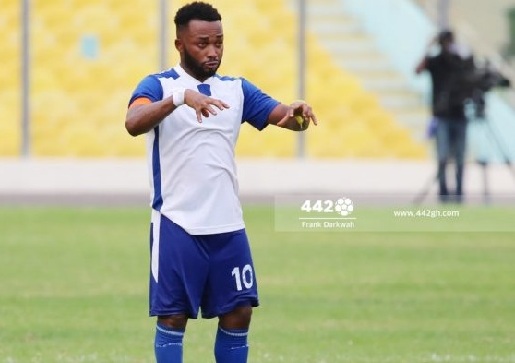 The Phobians completed a move for the former Great Olympics player in a two-year deal, as they look to bring to bear his rich experience in their continental campaign which starts on the weekend of September 9-12 in Guinea.

One of the most outstanding players in the domestic league last season, Awako emerged a top transfer target for the Phobians who went into negotiations last week with Olympics for their captain who had just two months on his contract to run, in a desperate bid to beat a CAF deadline to register players for their African campaign.

Yes, it is true that Gladson Awako will be part of Hearts of Oak squad next season. I recommended him to the Hearts of Oak management and Board of directors," Boadu told Kumasi-based Silver FM.

"He is very good with enormous qualities which will help us in our next season's campaign."

Awako’s arrival brings a wealth of experience to Coach Boadu's team ahead of their CAF Champions League, the player having played and won the competition with Congo giants, TP Mazembe.

The 31-year-old began his continental journey with Berekum Chelsea in the 2011-2012 season where they reached the group stage of the competition. Three years later, he won Champions League with TP Mazembe, having joined them ahead of the 2012-2013 campaign.

Aside winning the most prestigious club competition on the continent, Awako went on to add CAF’s Confederation Cup and Super Cup in 2016 respectively.

With all these achievements in Africa, Awako arrives with a vast familiarity at the continental stage and Hearts expect him to team up with the likes of Emmanuel Nettey, Ibrahim Salifu, Frederick Ansah Botchway, skipper Fatawu Mohammed, Caleb Amankwaah, Kwadwo Obeng Jnr, Raddy Ovouka and goalie Richard Attah, among others, to make the club’s return to Africa in over a decade a memorable one.

The Phobians who have been absent from continental competitions for about a decade have bolstered the team with the signing of the WAFA duo of Enoch Asubonteng and Konadu Yiadom who successfully completed their medicals last week, as the 2000 African Champions aim to make a big bang on their return to continental competition next month.

Asubonteng, 20, an attacking left winger who made 24 league appearances and scored four goals for WAFA last season, is expected to augment the depth of coach Boadu’s squad when the club’s busy domestic and continental campaigns resume.

Asubonteng switched to the Phobians after his contract with WAFA run out last season, having played an influential role in WAFA’s domestic campaign which saw them finish third on the Premier League log behind hearts and Asante Kotoko.

His compatriot, Yiadom, a defender, has made 49 premier league appearances for WAFA since joining the club in 2018.

Meanwhile, former striker Kofi Kordzi made a return to the Phobians last week after signing a two-year deal with the club.

The bulky attacker left Accra Hearts last season in a $150,000 deal with a Qatarian lower tier side, Muaither SC, but had to part ways with the club on mutual consent following financial challenges at the club.