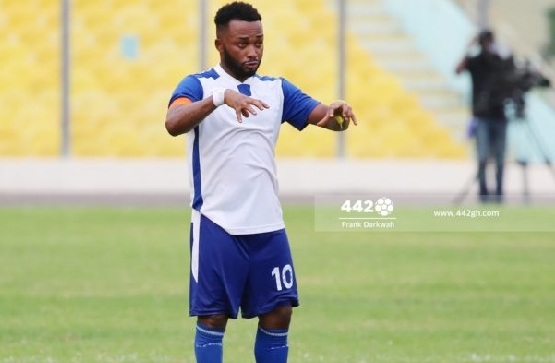 Embattled Gladson Awako has expressed his willingness to stage a dramatic comeback to Accra Great Olympics in a bid to end his controversial transfer move to Accra Hearts of Oak and also save his career.

This was after Awako had been trapped in a historic transfer brouhaha between city rivals, Hearts of Oak and Great Olympics in the past weeks, following a default in payment of the second tranche of GH₵50,000 out of the GH₵100,000 transfer fee before the October 2 deadline.

Speaking to the Graphic Sports in an interview last Friday, the CEO of Olympics, Mr Oloboi Commodore, disclosed that he had engaged the player on his future and he had expressed his willingness to extend his contract with his former club.

According to the CEO, the management of Olympics had already petitioned the Ghana Football Association (GFA) to declare Awako a bona fide player of Olympics after his transfer to Hearts had fallen through. Mr Commodore was hopeful that the GFA would grant Olympics their request.

“We have petitioned the Ghana Football Association (GFA) to declare him (Awako) as a player of Accra Great Olympics to enforce the contract of payment, strict enforcement and nothing more,” he said.

He noted that the player’s transfer deadline clock was ticking; hence, they had also written to Hearts in that regard and were awaiting their response to facilitate Awako's registration.

“We haven’t received any response yet but I saw a mail from Hearts of Oak, and there was supposed to be a response but the response was not attached so I have informed them that there is no response attached,” he said.

The Olympics official said if they were unable to register the player before the transfer window deadline, they would compel the GFA to give a special dispensation to Awako to be registered because the case was still pending with them before last Saturday's deadline.

“The window will be opened for the player to be registered because the case was pending with the GFA before the window closed," he stressed.