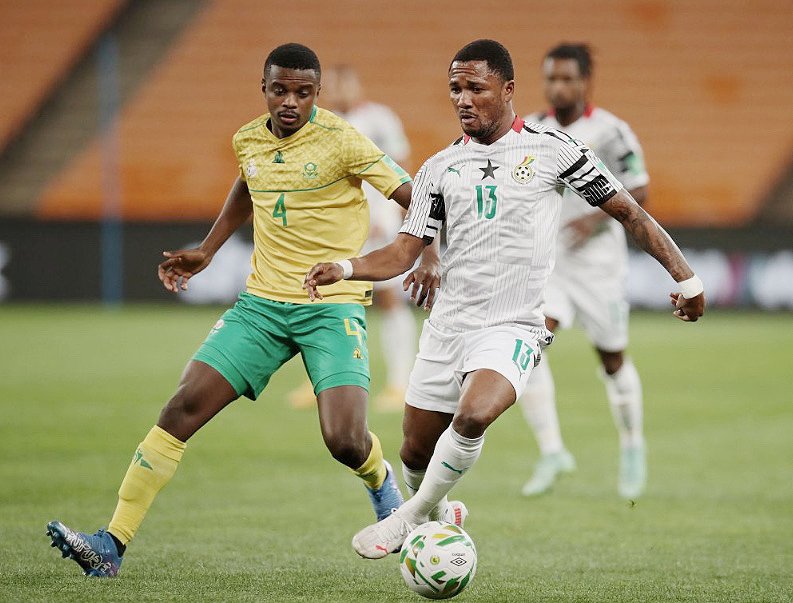 Ghana's Black Stars lost grounds in the 2022 FIFA World Cup qualifying campaign after losing 0-1 to South Africa in their Group G clash at the FNB Stadium in Johannesburg, with striker Bongokuhle Hlongwane emerging the long goal hero for the Bafana Bafana as his harmless flick in the 84th minute beat substitute goalkeeper Lawrence Ati-Zigi in post for Ghana.

The victory saw the Bafana Bafana toppling the Black Stars from the top position on the group log with four points from two matches, and one point off the Ghanaians who defeated Ethiopia 1-0 in Cape Coast on Friday September 3.

Ethiopia play host to third-placed Zimbabwe in the other group match today.

Four minutes after coming on as a replacement for injured Richard Ofori, Ghana's substitute goalie looked helpless as unmarked Hlongwane flicked the ball which caught Ghana's defenders flat-footed and rolled harmlessly into the far post. Ati-Zigi failed to react in time and was caught ball-watching.

It was a deserved win for the home side who needed a win to revive their campaign after failing to qualify for next year's Africa Cup of Nations tournament.

Until Hlongwane's winning goal, the South Africans came closest to scoring when forward Percy Tau headed home a measured cross from the left side of attack but the goal was ruled offside.

For most parts of the first half, the Black Stars — who missed seven key players who featured in last Friday's lone goal victory against Ethiopia — played as if there was not much at stake as they failed to play as a unit and allowed their opponents to dictate the pace of the game.

In an attempt to save the ball in the 46th minute, Ofori fumbled and caused the ball to slip through his legs, falling onto the path of onrushing Evidence Makgopa who surprisingly fluffed the golden chance in the six-yard box to the relief of the Ghanaian defenders who looked out of sorts.

In the 67th minute, Ofori committed yet another blunder but the home side failed to punish Ghana, and moments later he complained of injury and was subsequently replaced by Ati-Zigi who also lacked the confidence to organise his defenders and to prove himself as a worthy replacement.

Coach Charles Akonnor's side concentrated their game in midfield throughout the first half and hardly tested South Africa's goalkeeper Rowen Williams.

The second half saw the Stars playing similar pattern until Coach Akonnor brought in fresh legs by replacing his captain Andre Ayew with Samuel Owusu (70th minute). Iddrisu Baba Mohammed came in on for Majeed Ashimeru (78th min), while Algeria-based forward Kwame Poku came in for Joel Fameyeh (60th min), but the substitutions hardly changed the course of the match as the home side held on to their late goal for an important win.